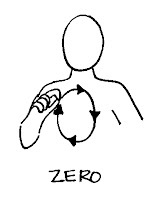 In The Secret Bank of Japan Lexicon, I attempted to demystify all things ZIRP for financial Japan-o-philes. But as we are all ZIRPers now (or soon will be ZIRPers - Hi Merv!), I thought it might useful to update the lexicon to help Anlgo-Saxons familiarize themselves with the new paradigm of.... Z E R O, "oh", "null", "nil", "naught".

ZIRP (c) - The policy of pricing money as if it were free, thereby encouraging its creation in [errr hopefully?!?] unlimited quantities to any and all comers, for the stated purpose of avoiding deflation, though actually it is to make sure that those whose eyes were bigger than their stomachs don't explode, which ostensibly is less than desired by anyone.

nearZIRP(sm)(c) - same as the above, only a few basis points higher; usually meant to keep at least one final bullet for the FRB in the eventuality things get even more FUBAR. Also can be used on the rebound in order to allow the FRB to keep the fallacy alive that it is symmetrical insofar as it takes similarly aggressive action against inflation as it is against deflation. (See also:  ZIRP-lite)

ZIRPtastic - The feeling of joy and bliss that overcomes the borrower of "free money" upon swapping US Dollar paper for something that will depreciate less.

disZIRPflation - The temporary state of purgatory where core asset and commodity prices are falling coincidental to ZIRP, and/or nearZIRP.

ZIRPcurve Risk - The aggregate embedded risk in a ZIRPified financial system where the paucity of short-end yield induces investors to "reach for yield" by going farther out on the curve, thereby squashing long-term rates towards ungodly low levels that cause a bubble in the long end, circularly making it near-impossible to shift policy or paradigms without inducing massive mark-to-market capital losses throughout the financial system. (See: "the folly of sequential bubble- blowing")

1st Law of ZIRP-o-dymanics - For every borrower there is a lender causing the net stimulatory benefits of ZIRP to be lost as savers now devoid of income curtail consumption.

2nd Law of ZIRP-o-dymanics - Exceptional circumstance of 1st Law where lenders are foreign, allowing the possibility that domestically , the net stimulatory effect might be positive.
ZIRPstamps - Food Coupons issued to OAPs (Old Age Pensioners) who live off of the interest from fixed-income investments, and as a result, now require income supplements.

ZIRPBento - The FreeLunch(c) Box served in Financial cafeterias, but available to any and all comers.

ZIRPtomism - The belief that the power of positive-thinking and free-money will allow something-for-nothingism to live yet another day.

ZIRPing-on-a-String" - Economic state describing the ineffective outcome of employing ZIRP monetary strategies when the the root causes of America's ills has next-to-nothing to do with the price of money, and everything to do with unimaginable financial and regulatory policy mismanagement and neglect during eight years of the Bush Admin.

ZIRPatility - The phenomena describing the schizophrenic market adjustments to ZIRP as they attempt to fathom whether deflation or inflation will prevail.

ZIRPocracy -Describes capitalism's policy paradox where the market price is proffered to be essential to the optimal, (or reeasonable approximation thereof) allocation of a scarce resource excepting when it comes to finding clearing prices for stocks, real estate, and anything covered by TARP, TAF, TSLF

ZIRPlosion - - Eventual market relapse caused by putting-off until tomorrow what should be adjusted to today.

A little off topic, but surely someone could do a version of Bon Jovi's "Living on a Prayer" called "Pushing on a String"...

I believe you neglected to define "ZIRPalicious"!

Ah, Cassandra you are like the ZIRPent of Eden, giving us a taste of the sour apple.

May I be so bold as to offer:

ZIRPhogs- Institutions slurping greedily at the trough, hoarding the "free pork" to fatten themselves, rather than sharing the gift with the starving (for loans) masses as intended (I hope.....).

ZIRPression - Economic condition characterized by fixed-income pensioners earning no returns on savings and frozen credit markets rendering consumers unable to finance purchases or refinance existing debts. Believed to be caused by the Community Reinvestment Act of 1977.

ZIRPrupt - The state of money market fund managers who have to forgo their annual fees because they can't afford to lose the AUM but can't have a negative return on cash.

With the Fed's own ZIRP so reducing the interest rate spread to be earned on the yen carry trade, clearly it will be necessary to increase the size of that trade in inverse proportion.

This is good because it means that the US will be able to sell as much dollar-denominated debt as it needs to -- the lower the interest rate on US bonds, the more the Japanese or those funded by them will buy.

All those people proclaiming that by buying up long-term Treasuries to force down long rates the Fed will be raising the risk of a dollar crash just don't understand that just as the Japanese high command was willing in WWII to fight almost to the last bamboo-spear-armed schoolgirl in order to preserve their power, so will they now be willing to fight to the last yen of her retirement savings.

I say sucks to english morphology: