British television sucks indeed! Hardly an escape from a day at the office in The City. One quick look at one small corner from this evening's TV Guide reveals the following...

Jerry Bruckheimer's Chase
The marshals search for a fugitive hedge fund fraudster who swindled his victims out of millions of dollars. However, their search becomes even more urgent when they discover a former Russian Mob Boss (and ex-investor) is also looking for their man. Meanwhile, Jimmy begins a day-trading scheme with Luke (with little success)
Category: Detective/Thriller
Channel: Sky Living 12:00am Wed 28 Sep

CSI: Crime Scene Investigation
One of Langston's former students is found dead, drawing the team into the murky world of Greek Government Debt. Questions arise as to whether the girl's thesis - investigating Goldman Sachs role in hiding the true state of Greece's national income statement and balance sheet - could have put her in harm's way as she got close to exposing the evidential Smoking Gun. The Exorcist director William Friedkin (really - no fooling!-Ed.) takes charge of the crime drama's 200th episode
Category: Detective/Thriller
Channel: Sky Living 1:00am Wed 28 Sep

Numb3rs
Still reeling from Don's back-stabbing by a gang of Tea Party supporters, Charlie throws himself into a new case: to track down a serial killer(s) responsible for murdering all of important bits of the President's Healthcare legislation. As the mathematician's colleagues start to question his numbers, he discovers that the murderer stalks his victims first and is about to strike again, this time against proposed higher tax rates fopr the wealthy. David Krumholtz and Rob Morrow star in the 100th episode chronicling criminal drama.
Category: Detective/Thriller
Channel: ITV3 1:15am Wed 28 Sep

Rating
7.9
Law & Order: Special Victims Unit
The team is called in when a French bank is found to have murdered the entire firm's profits and all the evidence points to one of their traders - a disturbed man who refuses to take his medication. However, the discovery of a new, second and surviving victim (a Swiss bank), in London blows the lid off their theory
Category: Detective/Thriller
Channel: QUEST 2:00am Wed 28 Sep

Rating
6.5
Law & Order: Special Victims Unit
An ordinary person, Dee P. Pull is found raped and dazed, but refuses to press charges because she is unable to either comprehend or remember the circumstances surrounding the crime. As Benson and Stabler set about piecing together the events, two former fraternity boys become the main suspects. Drama, starring Christopher Meloni and Mariska Hargitay
Category: Detective/Thriller
Channel: QUEST 3:00am Wed 28 Sep

Bonuses (SIC, surely this should be "Bones")
Stephen Fry resumes his role as psychiatrist Dr Wyatt, who helps Booth and Brennan uncover the truth behind the collapse of Lehman Brothers. Dan Castellenata, who voices Homer in The Simpsons, also appears (as Dick Fuld)
Category: Detective/Thriller
Channel: Sky Living 3:30am Wed 28 Sep

The Defenders
A man is caught carrying synthetic CDOs with their serial numbers filed away, and the legal duo work together in an effort to see whether they can get the charges against him dropped. Meanwhile, Nick receives a personal plea from the SEC, whose sister is trying to prevent the unnecessary death of a bear...
Category: Detective/Thriller
Channel: FX 3:55am Wed 28 Sep 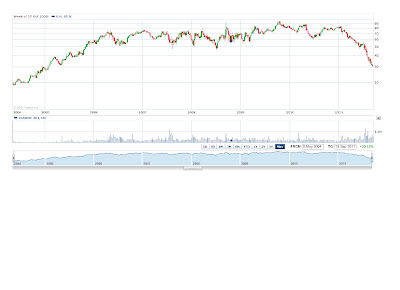 That however, would be too simplistic. More likely, GHL is a simply marvel of market complexity and dynamics - of shorts squeezed and replaced by others, who iun turn were rubbed-out by market events for return of capital, punctuated by index inclusions, long love-affairs by those adoring closely-held, growth, or someother alluring attribute and whose accumulation induced yet another financial hemorrhoid for the unfortunate prevailing short interests. Revel in its wonder, but I will keep chanting the mantra: Do not short on valuation (without a sackful of better reasons....)
Posted by "Cassandra" at 5:47 am No comments:

I couldn't help but smile with amusement at Kweku Abdoli's parting facebook post. Not because I ever threw the trader's equivalent of a "Hail Mary" pass. I've never countenanced such, and if I look introspectively, this is also perhaps my Achille's Heel, suffering as I do from excessive risk aversion. No. The smile-leading-to-guffaws ending in "Holy Fucking Shit!" was because I've been to my share of Grateful Dead concerts with the refrain

And its real and it wont go away, oh no
I cant get around and I cant run away
I need a miracle every day.

indelibly embossed upon my grey-matter more than 30 years later.

There are so many places to start with this one: The former Lehman Bros ummm errrr **risk manager** supposedly at the risk-helm; that it occurred within the supposed sober-minded Swiss Bastion of Stability (remaining CHF Longs take note and please re-examine thesis!!); The sheer size of the loss (WTF kind of nominal exposures did it take to generate that magnitude of red-ink?!?!?); and that, while dwarfing other rogue trading losses, still seems trifling in comparison to Madoff, GreeceIrelandPortugalUSACalifornia, FNM&FRE, and, yes, UBS's own US sub-prime write-offs and subsequent equity raise; AIG/Cassano's ridiculuous carpet-bombing of the market with sub-prime "puts", and so forth. These of course will be examined in (hopefully amusing) detail by everyone else, the results I am currently enjoying.

But the thing that struck me as most incongruous was that an apparently rather mediocre guy, with apparently no meaningful experience, or nepostistic "piston"-like ties to the bank, moves in two short years from the bank's graduate training program to head of the Delta-One Desk at one of the world's Top-10, perhaps Top-5, market institutions. See my eyes: they are blinking somewhat uncontrollably in surprise and fascination. If I had only known!! UBS would have been my counterparty of choice. Maybe I am a slow learner (I am of course!). Perhaps, as one suffering from over-aversion to risk, I tend to overestimate the complexity of things and am irrationally fearful of the number of ways one can get buggered and blind-sided. Perhaps I am unusual in my appreciation for how many less-than-salubrious ways a counter-party can "pick you off" (though I think not). And I look at UBS's competitors, be it Morgan or Goldman, and their younger MDs or desk-head 'wunderkinds' were/are generally rather impressive folk - the kind that only trench-weathered warriors would likely appoint for THEY have been around the proverbial block and DO (or should) know the score. All which leads me to back to the point of "What was UBS Management thinking promoting a guy in diapers to a war-zone flak-taking position of gravitas??!?" There is no shortage of talent around. It is not as if he is ENA-Oxbridge-MIT-CalTech apprenticed with Fisher Black or Paul Wilmott or interned five summers with Paul Julian Tudor-Soros-Bacon. It is absolsutely puzzling HOW HE OBTAINED THE KEYS TO THE CAR??

If you know, or think you know, then please do tell....(Kewpie Doll prize to best explanation!)
Posted by "Cassandra" at 10:05 am 2 comments: