Never more relevant than this precise moment, the Ten Commandments for Fiscal Adjustment (in advanced Economies) have been proverbially carved into a semi-official tablet by IMF Director of Research,  Dr Olivier Blanchard, And they are good, wise and just. Sufficiently so that the general polity should take careful note, else the Austerians,  the facile macro-vigilantism of the electronic punting herd, or the GlenRonPaulBeck's of the world gain sufficient traction to insure that a new-normal arrives amidst sufficiently grandiose [and probably unnecessary] dislocation.

Do pass it on to your nearest legislator, elected representative, candidate of choice, beneficiary of fiscal promises or privilege now-untenable, or so-called fat-cat who has benefitted asymmetrically from the previous fiscal regime in the US (and UK +Japan too) that rather obviously low-balled the revenue side of the National Income Statement for nearly a decade, or uber-protectionist. The abyss beneath the inflation/deflation ridge-line we are collectively navigating is just that - an abyss. And such a good map, followed carefully, is the type of sensible guide that might just prevent the type catastrophic tumble looming in its absence.
Posted by "Cassandra" at 1:30 am 1 comment: 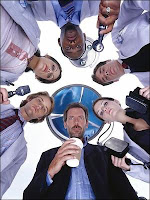 The inflation vs deflation debate rages unabated. Inflation skeptics buy bonds (even zeros!) whilst inflation bulls pile into gold, art and, for example, rare anythings. Austrians prescribe global vomit, whilst Keynsians seemingly prefer more of the same. If anything, the camps are becoming more polarised, with the World's Best PMs launching gold and gold-class shares, at the same time as the Europeans get a headstart on the US Feds and thheir States on long-neglected austerity, while JGBs gravitate anew towards 1%. Hmmm. Are we at that moment where Dr. House blithely prescribes steroidal treatment (after the requisite spinal tap, of course), only to reverse course when he sees the patient crash resulting from the prescribed meds? I think so - for it seems that whichever side of the inflationary-deflationary ridgeline we slip down (or are pushed towards by markets, policymakers, tea-party-ers or teutonic teatotallers), the results are unsatisfactory from the viewpoint of the patient, which will cause our metaphorical Dr House, to try yet another course of action.

IF this analogy is true, might we liken our situation to anything more real in the world around us - something more than a dramatic TV series (however popular) - something we might relate to more easily? The answer is yes, there are some splendid examples.

First and foremost, we can look to the Carny. Recall (at least those of my vintage) the infamous "Salt-n-Pepper Shaker". One needed a strong constitution, lots of peer pressure (or both) to ride this, defined by gravity and counterbalance. Like the prevailing financial and political systems, it is a devilish creation bordering on the absurd. Yet patrons willingly queued up for the "pleasure", thrill, or mere experience. Note that the motors and hydraulics that allow one to temporarily defy the natural state of entropy are impressive, and requiring the generation of some serious force and inertia to turn the complete loop, though ultimately gravity rules irrespective or uneventfully smooth operation or mid-stunt morbid mechanical failure. 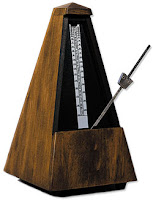 For the musicians out there one need only to look atop their piano, or inside their violin case to the lovely archetypical metronome. It too provides a reasonable approximation to the predictable timing of both policies and, in turn, markets back-and-forth movements, despite the former's apparent Brownian attributes in the shorter-term. Like policy, with its weight, and forces that set in motion, both the musician and the practiced observer can see the limits of such forces and their movement through space, caused by the primary large static weight's pull upon the smaller adjustable weight, which will, eventually, in rhythmic fashion return the undulating staff to its rightful place. 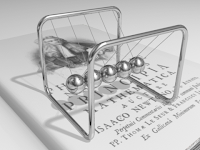 However, the metronome is but a simple form of pendulum: a reasonable, though perhaps insufficient abstraction. More apt, might be the mesmerizing Newtonian Pendulum (more technically known as "An Executive Desk-Toy") popularized in the 1960s for errrr ummm obvious reasons. Here we see the interplay between momentum, and kinetic energy within a reasonably simple mechanical system of man's construct. We can tangibly witness the transference of energy, and its eventual dissipation through the device's inability to conserve it. No, it is not perfect. It is on but a single plane, but it remains a good likeness of the transference mechanisms of financial markets and resulting political phenomena unfolding before us.

There is also, of course, the classic See-Saw (though the pictured one here is rather more elaborate than those of our youth and present-day playgrounds. It is worth mentioning if only because the eventual outcome path, while ruled by gravity, is heavily influenced by the relative mass of its human counterweights and their forces thus applied (and counter-applied). As a result, the relevance here is of the caveat that is my mantra: "shit happens", and as such, riders do from time-to-time end up in the emergency room, an outcome of which the public, and policymakers should remain cognizant. 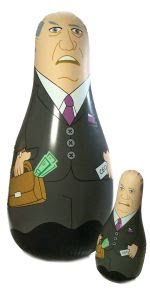 But the best analogy is perhaps the lead or sand-weighted Punching Dummy. Humanity, in general, their households, and their sovereign and corporate institutions alike will undoubtedly take hits - many hits, and from all sides - but life will go on, and as in post-war Europe, Lebanon, Argentina, Turkey, Serbia, and other seemingly unimaginable examples to our unpracticed imaginations, it will rebound and rise again, in fits, starts, almost randomly lurching to' and fro', before balancing upright again - if only to have the collective shit kicked out of it yet another time...
Posted by "Cassandra" at 6:39 am 2 comments:

As readers will know, I dislike the sentiments of undeserved entitlement. Not that I include health-insurance, public transport or a basic social safety-net as entitlement, despite its pejorative coinage. Rather, what I find loathsome is the sense of entitlement that, for example, certain senior corporate managers display that abuses both shareholders and employees for the primary purpose of parochial gain, or the type where political representatives abuse power for private gain at the expense of the public interest. The latest research into the psychology of power (as summarized by The Economist magazine) discusses results that show marked differences in corruptive behaviour depending upon whether the person in a position of control believes they "deserve it". In other words, power only corrupts the so-called entitled.

Activist investors historically purported to ferret out such senses of entitlement at the expense of shareholders in order to challenge managers where it was believed egregious AND of course, where a buck could be made (though not necessarily in that order). A potentially noble pursuit complementing its lucrativeness, if indeed as Elvis Costello sang, their aim is "true".

Yet, curiously, all is not well in Tara where Carpetbaggers such as Christopher Hohn's TCI. Atticus, Warren Lichtenstein's Steel, and Baran's Symphony Financial (SFP) are finding themselves in - how shall we term it - interesting positions visa-vis their very own investors, many of whom did or would like to get their money back, yet are faced with gates, lock-ups, etc that preclude such actions - at least to the letter of the prevailing Information Memorandum governing the rules of the letter of their investment. Of course while the spirit may suggest other courses of action, the letter is permitting the manager to hang on to the assets, collecting not-insignificant management fees (read: a lot by mortal measures), whilst the investor whose many resides in dubious, concentrated, often illiquid, positions stews, fumes and waits.

All which raises the possibility that the garden variety of activist's aim may NOT be so true, and hypocrisy may be prevailing for the sake of squeezing yet more (if at this stage of underwaterness only management fees) from hapless investors. Of course I could be wrong, and shutdown, orderly liquidation or simply distribution in-kind to shareholders may pose more problems and be more costly than staying the course, than I am presently able to conceive. But then again, maybe not. There is certainly no shortage of capable, more competent people willing to watch the paint dry on such large concentrated illiquid positions for a fraction of the prevailing management fees currently be collected.
Posted by "Cassandra" at 6:27 am 2 comments:

As a humble financial critic, I don't really "do" book reviews. But I will share a secret (though it won't be one for long) which relates to Tom Rachman's recently released (and amazingly, first) novel entitled "The Imperfectionists". In a form of literary "Pay It Forward", I chanced upon a review a few weeks ago in a broadsheet, a review that was so effusive as to pique my bullshit detector, though I remained sufficiently intrigued that at first chance I nipped into Blackwell's on Charing Cross Road, vaguely describing the subject to one of the staff. Fortunately it was the Fiction buyer who has intimate recall of what he's bought, so I plopped down my depreciating sterling in exchange for a hardback copy.
The novel revolves around a selection of mostly unendearing characters that have intersected four decades in the life of a fictional Rome-based old-school newspaper (presumably modeled, at least in part, upon the International Herald Tribune for whom he reported). The fact that they are unendearing (my spell-check denying the validity of this description) on the surface violates a golden rule which is the audience needs to care about his characters. Yet, Rachman has miraculously stood this imperative on its head, and opted for, as the title suggests - highly flawed subjects - who, one by one, are enviscerated by his narrative, their dialogue events, their choices and actions. Perhaps, this is not incongruous, for it is their flagrant flaws which lure the reader.
Literature Nobel-prize-winner  Elias Canetti, in The Earwitness, unmercifully caricatured behavioural archetypes in a parsimonious but brutal assault upon human flaws and their product. It is dark, and however sympathetically critical the reader may wish, there is no attempt to amuse, leaving the reader deeply unsettled, perhaps like Canetti himself. Rachman, focused upon his caricatures, employs satire, wit, punctuated with measured philosophical observations imbued into the dialogue, to reveal their flaws that, unlike Canetti's archetypes, are so real and close-to-the-metaphorical-bone that that reader cannot help but be interested, whether out of morbid fascination or voyeuristic schadenfraude for those harsher judges, though in the honest, I believe there will be sympathy whether deserved or not.
I will not spoil any plots by championing this effort further, but I will advise you - whether for entertainment or to help [temporarily] purge oneself of the knot-in-the-stomach like consequences of systemic discontinuity, to buy it and read it. And Mr Rachman, if you chance upon this plug on your behalf, I will gladly buy the beers if you can reveal even in part, just how you pulled this off.
Posted by "Cassandra" at 10:25 am 5 comments:

So farewell
then
Hatoyama
Yukio

Despite
making promises
you couldn't keep -
you achieved
more than
you
know...

Primarily
by giving perspective
to sentiments
regarding our own
FUBAR
system(s).

P.S. For proper insight and analysis on the subject, visit http://shisaku.blogspot.com/
Posted by "Cassandra" at 4:22 am 4 comments: