Marauders, pirates, outlaws, scallywags, and gangs of opportunistic thugs have, since time immemorial, been the scourge of civilized folk pursuing ordinary civilized life. Some have been officially-sanctioned (think Drake or Surcouf), while others were banished from society to life on the periphery (think Ronin). Most, from my anecdotal observations, however, seem to do what they do as an alternative means to make a living, mimicking one of nature's bullies: the frigate bird.

This threat, ignoring the very exercise of extreme and brutal power by states seen occasionaly in history, has largely remained peripheral, though on occasion they've bizarrely intersected with The State (e.g. Queen Ranavalona of Madagascar, or the Chinese Taipings), such examples being sufficiently rare and weird as to capture the considerable attention of George Fraser MacDonald. So rare, and so weird has it been, that the exploits of larger-than-life wanton criminal outlaws, and the good citizens' fight against them, have been a most fertile subject for writers and artists, particularly those of the pulp variety.

Oscar Wilde opined that "life imitates art", an astute observation – even more apt in modernity given the wide and numerous avenues available for mass-distribution. Foremost at this nexus of the criminally weird and the crazy Prophets - whether knowingly or unwittingly – is the self-proclaimed Islamic State, eerily resembling the violent and chaotic exploits of DC's most villainous Rogues Gallery. Anarky, The Joker, Firebug, Dr. Death, Cypher, Brutale, Deacon Blackfire, The Mad Hatter, Ra's alk Ghul, The Riddler, Proteus, Puppet Master, Thanatos, The Scarecrow, Roman Sionis, all conjured from authors' fertile imaginations, can hardly hold a creative candle to their real-life mimics wreaking havoc across the no-less-fertile crescent world. This result begs the simple question: How closely have the IS leaders studied, NOT the Koranic scriptures they purport to follow, but the collected exploits of Batman's colourfully-crazy nemesii? For if it was true that Bin-Laden was a big consumer of porn, is it any further-fetched to wonder whether al-Bhagdadi, al-Anbari, or al-Turkmani and their wicked henchmen have an accumulated and much-coveted stash of Caped Crusader pulp providing them with near-limitless inspiration?

As in the self-proclaimed Islamic State and their would-be Caliphate, DC's dystopias are riddled with logic flaws and conveniently irreconcilable inconsistencies. Ignoring that the most fantastical rogues have powers that defy the laws of the natural world, I've always found it difficult to suspend my disbelief when see the armies of seemingly loyal thugs and henchmen support their evil mastermind leaders in pursuit of their [rather dubious] goals - be they revenge, sadistic lust, political domination, or financial control of planet earth. This is as true of 007's nemeses, as it is of Dr Evil's and the hordes of baddies perennially threatening Gotham City.

Their un-Flashman-like zeal to protect and even sacrifice themselves so their leaders can escape, is only matched by al-qaeda or IS acolytes, strapping a bunch of semtex to themselves before walking into a mosque, a busy hotel or a parliament building and pressing the “detonate” button, acts that belie normal comprehension - leading one to presume that most are undoubtedly as bat-shit crazy as their leaders. Others may be merely desperate, or perhaps motivated by sharing financial gain, or the benefits of power when their New Order prevails. I suppose one might ponder the similar question as to what motivates the disciples of Rupert Murdoch, but THAT question not on the menu today.

Though these explanations might underpin some villainous actions, IS seems to more closely mimic many other archetypical patterns in DC rogue gallery scripts. They employ mind control methods to recruit and maintain their [expendable] army of loyal followers. They wear macabre masks and hoods to both terrify opponents and hide their true identities. They typically have family-related motivations, societal alienation or back-stories driving a strong desire for revenge. They pursue more or less psychotic, maniacal and meaningless acts of murder and destruction. They are often driven by a negative hatred of someone or something rather than a positive vision. Their leaders share decided prophetic or messianic-like complexes, and often had previous lives that one would consider “normal”. They share an absence of normal empathy for ordinary people and victims alike. Their leaders are often considered to be highly accomplished evil geniuses with a penchant for the macabre. And finally, they all wear ridiculous costumes or uniforms that is obvious to all observers but themselves.

However much Gotham City resembles Sodom & Gomorrah, most of both cities' inhabitants were ordinary folk, living ordinary lives – effectively caught in the middle between lunatic wickedness and callous corruption and greed. However apt this might be of the masses' predicament today, the problem remains: how does the (mostly innocent??!) populace protect themselves from the incursions of The Crazed, as well as from their own predatory elites. History (going back 1000 years to the Salafi-like Assasins sect) and practical observation suggests random covert acts of terrorism are, by definition nearly impossible to thwart. This is true of an idiot wishing to take out a plane with his “shoe” (saved by only by luck) as it is of an idiot with a AK-47 whose (tragically consummates) a whim to take target practice on a beach of humans.. 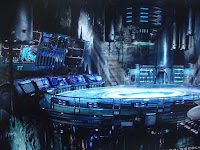 But make no mistake: life imitates art in the realm opposing The Rogues – both publicly and in the shadows. “We”, the good citizens, have a metaphorical NSA Bat Cave in Nevada (and undoubtedly many more). We have our “Alfreds”. We have special forces resembling vigilantes, whose kit & kaboodle - secret weapons, Bat Planes and Bat Drones - together whose power, resolve and destructive force both commands the respect of and infuriates the demented ones. And, like the Caped Crusader, we suffer the duality of an external existence governed by probity and by The Law with a

tacit feeling that something darker, harsher, more flexible, is required to combat the rogues...something more Heart of Darkess Kurtzian…whose soundness, in better times, might be questionable. This is, at once, both necessary and fraught with multiple dangers – both practical and existential – and is a conflict seemingly resolvable only by/with counsel and oversight from the wisest (most incorruptible, least emotional) of women (and a few men), but not by wrath.

It is important, at this stage, to remember that Batman never really was the near-perfect Batman/Bruce Wayne good-guy of the 1960's. Truer to his origins, he is The Dark Knight. He decidedly has some baggage. So he doesn't always get it right in the fight against the sick and twisted fucks, and for the avoidance of doubt, they ARE sick and twisted fucks. And sometimes his actions, against his own better judgment, resulting from his own back-story, make things worse, however good his intentions might appear. He is, after all, meant to be, just human...
Posted by "Cassandra" at 1:24 pm No comments:

What Have The Europeans Ever Done For Us

The interior of UKIPs headquarters. A darkened room with a very conspiratorial atmosphere. Nigel Farage and Douglas Carswell are seated at a table at one end of the room. Steve Baker, dressed in Activist gear — black robes and a red sash around his head — is standing by a plan on the wall. He is addressing an audience of about eight MASKED Activists. Their faces are partially hidden...

Steve Baker:
We get in through the underground heating system here... up through to the main audience chamber here... and Junkcer's wife's bedroom is here. Having grabbed his wife, we inform Juncker that she is in our custody and forthwith issue our demands. Any questions?
Graham Stringer:
What exactly are the demands?
Nigel Farage:
We're giving Juncker two days to dismantle the entire apparatus of the European Imperialist State and if he doesn't agree immediately, we execute her.
Kate Hoey:
Cut her head off?
Steve Baker:
Cut all her bits off, send 'em back every hour on the hour... show him we're not to be trifled with.
Nigel Farage:
Also, we're demanding a ten foot mahogany statue of Jacques Delors with his cock hanging out.
Douglas Carswell:
What? They'll never agree to that, Nige.
Nigel Farage:
That's just a bargaining counter. And of course, we point out that they bear full responsibility when we chop her up, and... that we shall not submit to blackmail.
Omnes:
(Applause) No blackmail!
Nigel Farage:
They've bled us white, the bastards. They've taken everything we had, not just from us, from our fathers and from our fathers' fathers.
Douglas Carswell:
And from our fathers' fathers' fathers.
Nigel Farage:
Yes.
Douglas Carswell:
And from our fathers' fathers' fathers' fathers.
Nigel Farage:
All right, Carswell. Don't labour the point. And what have they ever given us in return?
Graham Stringer:
Freedom of movement, so we can live in Spain and France and...
Nigel Farage:
Oh yeah, yeah they gave us that. Yeah. That's true.
Masked Activist:
And consumer and environmental protection!
Douglas Carswell:
Oh yes... protection!, Nige, you remember how polluted the UK used to be like.
Nigel Farage:
All right, I'll grant you that the freedom of movement and consumer and environmental protection are two things that the Europeans have done...
Bernard Jenkin:
And the Convention on Human Rights...pfewww...we have NO protection under British Common Law...
Nigel Farage:
(sharply) Well yes obviously the Convention on Human Rights... Human Rights go without saying. But apart from the freedom of movement, the consumer and environmental protection and the Convention on Human Rights...
Another Masked Activist:
Single Market...
Other Masked Voices:
Cross border regulation... Food Safety....Reciprocal Healthcare... Regional Development ...
Nigel Farage:
Yes... all right, fair enough...
Activist Near Front:
And the wine...
Omnes:
Oh yes! True!
Owen Paterson:
Yeah. That's something we'd really miss if we left Europe, Nige.
Masked Activist at Back:
Cheap immigrant labour who works hard and does the jobs no one else wants to do!
Douglas Carswell:
It IS safe to use a public toilet...
Steve Baker:
Yes, they certainly know how to keep places clean... (general nodding)... let's face it, they're the only ones who could in a place like this...
(more general murmurs of agreement)
Nigel Farage:
All right... all right... but apart from freedom of movement, environmental and consumer protection, The Convention on Human Rights, a single market, cross-border regulation, food safety standards, reciprocal healthcare across Europe, regional development, wine, speaking with a single voice whern negotiating with USA or China, and cheap labour to do the jobs British people do not want to do... what have the Europeans done for us?
Graham Stringer:
Brought peace and prosperity....! Just look at what things were like BEFORE the EU....
Nigel Farage:
(very angry, he's not having a good meeting at all) What!? Oh... (scornfully) Peace and prosperity, yes... shut up!

So Farewell
then
Alan
Bond.

The most
infamous
Ozzie
contrapreneur.

You gave
Laurie Connell
a "run for
his money".
(no pun intended)

Few young specs
will recall
your name;
But,
they should.

For you were
a case study on
the peril(s)
of paying
way too much.

But at least
you stole THE Cup
from the Yanks
fair and
square.

(With apologies to Private Eye and EJ Thribb)
Posted by "Cassandra" at 2:37 am 1 comment: