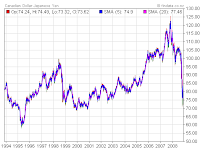 Just as there are progressives and conservatives in the political sphere, so to do similar dichotomies exist in the financial sphere. Trend-followers and contrarians are arguably the most generic categories. I make no apologies for being a contrarian - for one must understand oneself and be comfortable in one's own shoes to profit. Having said that, I am not stupid, for I have read the momentum literature from cover to appendices many times over, and so piss into the proverbial wind judiciously and with good cause. With that out of the way, I will suggest briefly - contrary to Stephen Jen and many other currency pundits - that the days of yen strength are numbered, and that come the end of this calendar year - particularly vs CAD, AUD, SGD - reversal is nigh. 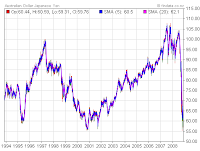 My reasons are overly simplistic and undoubtedly, many will argue to the contrary but I believe a meaningful chunk of the carry trade has been unwound (and if one hasn't unwound yet, one probably won't!!); macro-specs are now all long; risk-avoiders are long it as an alledged safe-haven; and systematic traders and trend-followers are long because of the alignment of highs and lows. Strategists are yen-bullish. So who's left to buy? Not exporters, that is for certain. So who? BoJ? Ummm, no one needs reminding of their own current long USDJPY position, and the fact that they foolishly sold NOTHING in the intervening years of massive yen weakness. Moreover Japan itself has, for the past decade been diminishing their own home bias, undoubtedly a financial sojourn they deeply deeply regret. Then there are the fundamentals. And for Japan, they suck. Over-dependence upon exports, horrific and deteriorating demographics, worst Govt Debt to GDP ratio in the developed world, scarily making Italy appear positively prudent, and interest rates that as unappealing as anything out there, not even mentioning a political process almost as dysfunctional as that which enabled the sub-prime fiasco (exemplified by the near-suicidal attachment to whaling and the seeming inability of the Keidanren to garrot the lot of them in the name of Japanese self-preservation. Last, there is the chart. Yes the world is different. Yes leverage will be diminished going forward. But to a contrarian, none of this matters as these pictures are like a red cape to a bull. 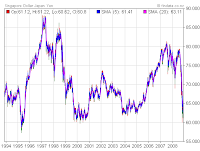 I cannot tell you precisely when this reversal will occur. But I feel it in my bones when something has bungeed too far and is set to reverse, and I reckon it will be shortly after the new year. But it will sharp and vicious and bodies will assuredly be piled-up at the exits. This prognostication will undoubtedly come as music to the MoFs ears, for there must be little cheer these days in the Ministry, with the exception of feeling fortunate NOT to be a member of the Treasury team in Washington.
Posted by "Cassandra" at 4:47 am

The argument certainly makes sense, but I would not underestimate the infamous Mrs. Watanabe who, unlike most hedge funds, in my opinion has not yet bitten the bullet and taken her losses on the carry trade. The vast majority of my Japanese friends have some sort of $ exposure, be it a foreign currency deposit, life insurance that pays out in $, or other clever retail products from Nomura & Co. Typical for retail investors they havent cut their losses yet (losses ? I wait until its back at break even at 115) but their likely will once they cannot handle the pain anymore, below 90 I guess. If they do this will cause a final blowout selloff.
In addition to Mrs Watanabe, its also worth pointing out that the Japanese corporate sector has played the same game, as we have recently learned from huge losses at Keio University, Komazawa University and Saizeria, likely only the tip of the iceberg.

Rakuten, very good points. A zaitech blow-out in May when the balance sheet damage is laid bare?
My opinion is that the currency markets are already anticipating a world of ZIRP and aren't going to budge much for a while... the real trade big trade is going to be timing the repudiation of fiat money. Though, I hate to confess to harboring such thoughts, since I'm not a moldbug.

There'll be a reversal in yen strength?? And sometime after the New Year, no less. Geez, you're really going out on a limb there, Cassandra. And here I thought the yen was somehow going to wind up in some diabolical Yen Acceleration CERN experiment, whereby it would appreciate indefinitely until it tore a hole in the fabric of the universe.

C'mon...you're not offering a contrarian sentiment at all. Most people feel the yen will continue to strengthen against the dollar until about .90. Then, there'll be a period where the gains might acceelerate to .85...depending on perceptions with regards to BOJ intervention. All of which is expected to happen between now and mid January.

After that, there'll still be some who expect more yen strength. It's these intrepid traders who will find themselves in the monority. Most, however, will say, "That's it."

"Contrarian." Please. Yen strength into the new year followed by a reversal (after unprecedented yen strength vs all currencies) is about as conventional as it gets.

For those interested in the inner workings of an intellectual force majeure, here's DD's explanation of how the bond market works...

Things won't get better until real estate bottoms.
While waiting for real estate to bottom, investors flock to treasury safe-haven. Due to increased demand, lots of trasury sales.
The sales lead to higher T-bill rates, which leads to higher mtg rates.

who really knows how much
of the carry has unwound? lt charts do scream buy AUD with yen but this is after all a black swan

I will defer to the commenters above who are closer to the pulse of Mrs Watanabe. For my two cents, I will suggest Black Swans precisely resemble thus (having met more than a few in my time)