Back from holiday and rested, I see in a headline that all is now clear: Chief MoFo Tanigaki's pseudo-vicious fight with the BoJ was a prelude to his now not-so-secret desire to succeed PM Junichiro ("Elvis") Koizumi as Japan's next PM, Bloomberg reported. His platform? Consumption tax increases coupled with lukewarm anti-nationalist foreign policy. It is the true Keidanren platform making him far and away the favorite of Corporatist and Mercantilist interests in Japan who would like to see a weaker yen and a "kindler, gentler Japan" to the billions of emerging Asian consumers. The only problem is that these are inherently unpopular policies with "the people". No matter that the Emperor's own reservations have been leaked to the press about PMs making official visits to the Shrine where amongst others, the spirits of Class-A war criminals are errr remembered and revered. No matter than neo-mercantilism is set to torpedo the post-WWII monetary system. Tanigaki is well behind Abe in polls, who leads with between 40% & 50% of voter sentiments. But at least we can now understand why Keidanren's Man With a Plan has been such a persistent and vocal critic of ending BoJs Free Money policy.
Posted by "Cassandra" at 6:19 am No comments:

How does one disentangle youthful exhuberance from recklessness or separate age's wisdom from over-conservatism? These are particularly interesting questions from the point of view of investment and speculation, and I believe, become particularly germane following a period where volatility and diminuation have been absent from price action for a longer-than-normal duration.

I have no categorical answers, but I have some anecdotes to share beginning high atop the petit Luberon in Vaucluse some years ago. After a lovely picnic amidst the herbs & cicadas, our group descended towards Oppede down a path that turned into a large and steep field of loose scree. My friend and I had done this walk dozens of times, though we were with a group of young people who were on the mountain for the first time. Descending thorugh a field scree, with the right pitch can be as exhilarating as skiing, pulled by gravity, softened by deep but hard loose stones. We picked up the pace, and within the limits of safety, began surfing through the stones. The others made their way, too, surfing at their own pace, or excusing themselves from what must be sais, was a risky undertaking to begin with. A few moments later, one of the younger and most exhuberant members of the group, brimming with testosterone and enthusiam, came bounding past us, taking dangerously giant steps. Mid-stride, I look over at my experienced friend and we shook our heads in disbelief and exchanged looks that said "That lad is insane and it will end in tears". But a few minutes later, we saw him splayed across the rocks, with bright-red blood oozing from a large and nasty gash atop his head. Bad luck? Possibly. Overconfidence & testosterone? Probably.

I drive a motorcycle myself which might be considered a risky endeavor (at least by the actuaries). But I am neither reckless, nor unnecessarily aggressive. I take advantage of the benefits that the motorcycle offers to bypass traffic jams, always looking for the unexpected: the car that is signalling left. but turns right; the motorist exiting from a blind drive, etc. This caution is driven by fear that comes with experience and wisdom. It results from a rapid mental cost vs. benefit analysis which says the advanatge of early arrival, or satisfication at having beaten the traffic is insufficient to the cost of death or incapacitation. It is that simple. Yet, every day, I am surrounded by other motorcyclists - mostly young men their late teens and twenties - who arrive on the "wrong side" of the cost vs. benefit calculation. They weave recklessly through cars and fellow motorcyclists, pass cars at high-speed around blind corners, tempt fate of on-coming traffic with cavalier non-chalance, and overtake around cars that have stopped to let someone pass. I realize that I could be accused of being overly conservative, of the kind that comes with age and family. But few of my aged peers die or or paralyzed needlessly or painfully. This fate is reserved for the reckless and young. Interestingly, they are not without skill as riders. Most are better than I, with many driving from young ages and participating in motocross. No. Their achilles heel lies in their inability to visualize potential risks; to imagine mechanical failure; to anticipate that others might be fallible. In short, they are onverconfident, probably driven by raging levels of testosterone.

Which brings me to markets, speculators, and hedge funds. For one cannot but see the parallels between youthful enthusiam and confidence - often a prerequisite for outsized returns (without respect to risk). But it is also a primary contributor to crash & burn syndrome. Age does (or at least should) breed a brand of conservatism that teaches one to respect markets, but to value the power of independent thought. To look forward, rather than backward. To approach risk laterally, and from many dimensions. To question the paradigm of "what is working", and look to those that are not for potential ideas. I am certain that there are smart and capable young investors, wise beyond their years, and every bit as capable as older peers. But they are rare. Youth, by definition, is prefaced by single-mindedness, that is a boon during a bull-market, but a potentially fatal flaw when risk rises, paradigms shift, and the ground upon which one stands rapidly turns to quicksand. Take a moment to reflect upon the benefits of age and wisdom.....
Posted by "Cassandra" at 5:11 am 2 comments:

Japan's MoFo's were at it again today, issuing warnings that deflation might not have been whipped yet, and that the BoJ should refrain from raising rates from their current Zero level despite the lowest unemployment rate in the OECD, rising asset prices, a 7% of GDP fiscal gap, as well as robust capex and rising housing starts, and, yes, eight consecutive months of positive inflation numbers. All which reminds me of Monty Python's "Dead Parrot" sketch. Given Mr Tanigaki's variant perception, I thought it would be a good time to break out my Tanigaki Scrapbook. 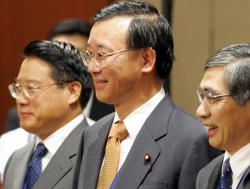 Here is Mr Tanigaki one of his partners in crime, Mr Kuroda, looking very cheerful indeed at a recent ADB meeting. Notice the smiles and the confidence. It is interesting to note that in pitched battles between the Finance Ministry (or the Treasury, Exchequer etc.) and the Central Bank, in any country (except where the Chief Banker is a toad), the Finance Minister almost always resembles the cuddly toy, while the Central Banker is always cariacatured as Darth Vader. This is because the Finance minster typically tells "the people" that they can "have their cake and eat it too". 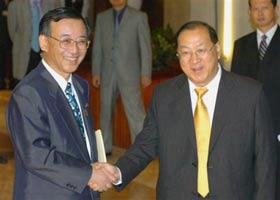 Here, we see Japan's Finance Minister Sadakazu Tanigaki, shaking hands with his Chinese counterpart Jin Renqing in the Chinese port city of Tianjin. Tanigaki was in China to attend a meeting of Asian and European financial leaders. Notice how tightly Mr Tanigaki is holding Renqing's hand. It was reported by those present that following the photo-opp, Tanigaki refused to let go, and security had to be called to pry their hands apart. Though it was hushed by reporters, he was reputed to have lost his typical decorum revealing the honne behind his tatamae by screaming: "We will follow the RMB where-ever it goes, we will NEVER revalue without you, whatever the cost, to the ends of the earth and the end of time.....we will not let it go...." 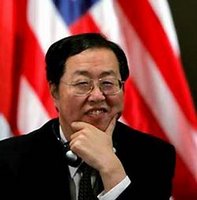 Apparently, my sources tell me, PBoC Chief Zhou Xiaochuan was observing Mr Tanigaki's rather uncharacteristic outburst, and was seen here grinning broadly at the mad-hatter-like behaviour of the Minister, reputed to have said: "Hasta la vista, baby!" 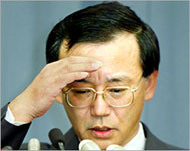 Here is Mr Tanigaki displaying faux-concern for the impoverishment of the "Mr & Mrs Sato" that might result if the Bank of Japan raises interest rates to where they should be given that Japan has the lowest unemployment rate in the OECD, is running a 7% of GDP fiscal gap, experiencing a boom in asset prices, with commercial rising rents, eight consecutive months of rising consumer prices, and robust housing starts. Observers are asking why, with all the problems in the world, and reform issues on his plate at home, Mr Tanigaki has made it a personal crusade to undermine the Weberian bureaucrats steering the BoJ. Answer: One might think it was to hide the immense incompetence within his own ministry and his inability and unwillingness to do anything about the huge and persistent fiscal gaps. But the real reason might be, that higher rates, though prudent and necessary, might ruin the MoF's grand Macchiavellian plan to trash the Yen to insure Japan's currency remains competitive with its Asian neighbors.

Ah yes, "Plan B". Mr Tanigaki is shown here with his vision of the future: A Yen that has been debased so thoroughly by persistent 7% of GDP fiscal gaps, and through years of ZIRP and quanititative easing, that the only thing the YEN will be good for is framing and hanging on one's sitting room wall. Observe the Elvis-like hair-do on the pictured figure on the note. 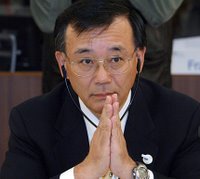 But Tanigaki is wily and always prepared. Here, he is seen executing "Plan C": Pray Pray Pray that the BoJ will continue to neglect it's fiduciary responsibilities. No matter that China remains vastly poor by comparison. No matter that the USA has [perhap unwittingly] donated many jobs and much wealth to the cause of Chinese development. No matter that Japan, though vastly rich is unwilling to give a competitive inch to China or its Asian neighbors, putting the vast burden of global adjustment squarely upon the Americans and the Europeans. No wonder the Chinese detest the Japanese. But can it last? He is praying it can and will. 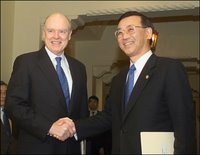 Finally we see Mr Snow giving advice to Mr Tanigaki on post-governmental careers. Mr Snow tried the less oblique route to international financial reconciliation, but was undermined (like Mr O'Neill before him) by an American Congress pandering for votes and a political system dominated by special interest campaign contributions, an administration that spells Economics with a "K", and by the helpful assistance of "friends" such as Mr Tanigaki, Mr Renqing.
Posted by "Cassandra" at 5:10 am No comments: