That seems like a lot of zeros, at least in comparison to Ben Ali (and his wife's family) who are reputed to have walked off with $3,000,000,000 to $5,000,000,000, though they are comparable on a per capita basis insofar as  Egypt's 85mm population is roughly proportional to Tunisia's 10mm inhabitants.

Russia's kleptocrats, by the same measure, seem positively munificent in their relative financial benevolence, even without eye-poppingly large round estimates.

Keeping consistent with comparisons, the piggiest, however, seems to be the recently deposed Dr Ewart Brown of Bermuda, who according to critics is reputed to have extracted some $300,000,000 to $500,000,000 on a lilliputian population base of a mere 60,000 island folk. This is approximately $6,000 per head taking a modest midpoint, versus the Mubarak clan's almost $600 per head or Ben Ali's more modest $400 per head "contribution" (on similar midpoints).

In all fairness, Bermuda's 2008 GDP per capita was an eye-popping world-beater at $94,000, making their contribution to Dr Brown's retirement fund (should he survive an almost certain imminent audit) a mere annoyance at 6.3%, not far off US State sales tax levy.  Ben Ali's was a more substantial 10% tariff, not even half of the Egyptian leader's near 22% of GDP per capita. Of course one might counter that the former army officer toiled long and hard (or long anyway) for more than 30 years picking up those wads of large notes along the way to presumably stash in UBP where his daughter serves on the Board, though few of his opponents would cite longevity as one of his virtues. Finally, when one considers that the size of the average Egyptian household is substantially larger than the average Bermudian one, the size of his take per household appears even more egregious in relation to per capita GDP. And we roll our eyes at Mssr's Clinton and Blair's multi-zeros bouquet per speaking engagement!! 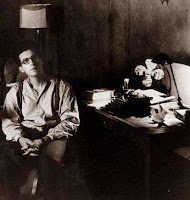 OK, it's not THAT bad (cotton is at 1.74lb!!). Day-job. Family obligations. An occasional hard night of drinking. Etcetera. More importantly, little perspective to add that is worthy of the volume required to rise above the ambient noise and chatter of those extrapolating yesterday's trends into tomorrow. Yet the fact remains that eleven of my last fourteen posts remain in draft form. Stillborn. Aborted satirical foetuses.  Wonder what W.P. Mayhew would think of that? If you need me, I'll be at"the Earle"...
Posted by "Cassandra" at 4:36 pm 4 comments: