During times of liquidation, panic, and revulsion, when authorities are trying to establish a definitive floor under asset prices, and create an atmosphere of greater confidence in order to assuage fears and encourage longer-term capital investment, there is reasonable benefit clearly telegraphing policy intentions. Speculators may (and probably will) use this elevated level of certainty to front-run actual "real" flows. And this is fine and good since desired policy outcomes (at such times) tangibly benefit from the reduction and/or elimination of speculative short positions (or at the very least refraining from disinvestment or erstwhile liquidation). Policy objectives, are further hastened by speculative flows, at least initially, whether by confidence-bolstering or behavioral feedback effects.  While the promise of backstopping is real, the primary effect results from old-fashioned "jawboning" to harness otherwise pro-cyclical flows to stabilizing, counter-cycling effect. At such times, it likely that just credibly stating that one will pursue certain stated policy(s) with defined objectives is often more efficacious than the implementation of the policy itself - the operative word being "credibly".

There comes the point in the inevitably-cyclical process - recent context being QE2 or QE3 or the present (choose your poison) - where fear of the abyss has passed, and when prevailing policy's "certainty", is extrapolated and viewed as providing perennial and asymmetrical risk-reward, or a proverbial "free lunch", irrespective of the extraordinary conditions for which it was originally conjured, and its decidedly-temporary nature when seen in an historical context. This is the moral hazard that policy certainty can wreak in general, and what disturbs me about ZIRP/QE in particular. The macroeconomy, in its aggregate investment decisions, typically overshoots sufficiently well without the further help of leveraged, speculative flows. There is little to done about The People making overenthusiastic coincidental investment and consumption decisions on the basis of the recent past, outside the modulation of traditional fiscal and monetary policy. This IS the business cycle.

Given the size of the financial economy in general, the increasing size of trading-oriented, leveraged investments, and feedback-related trading and risk-management styles, and the general hordes within the momentum-driven electronic herd, much of which is focused upon, and driven-by observing rather arcane nuances in policy, central-bankers in particular should, rightfully, be mindful of aligning the aggregate animal spirits in the general economy with leveraged financial speculation attempting to game perceived policy certainty.  In short, in order to deter leveraged speculative activity at such times, when it is, as Rumsfeld might have termed, "decidedly unhelpful", i.e being pro-cyclical well-after the sell-by date of its usefulness, markets periodically NEED to be spanked. They NEED to understand that policy should, and will be, data-dependant. That might include whipsaw moves in rates and prevailing policies, even if sub-optimal with perfect hindsight. They [markets] need to understand there is no certainty, and no free lunch. And as more and more investment becomes rote, algorithmic, and systematic, these models (and their programmers), too must incorporate uncertainty at levels that incorporate longer-frame regimes than many systematic macro and risk-parity strategies contemplate or integrate, or other endeavors that overweight recent regimes at the expense of the more-distant-but-not-wholly-irrelevant past, or the next. Should one doubt the benefits of such an uncertainty principle,  simply imagine the wild rumpus that would ensue following universal pursuit of the free lunch. Some would argue we're already there (though I am not so stridently convinced despite sympathetic caution).

Pulling away the milk-teat is never easy. Markets will need to get used to a return to policy uncertainty. There is significant momentum in the real economy, and it is likely it will not be derailed by a bias towards higher rates, or marginally-increased financial market volatility. We should not shed a tear for those Icarii who get run over by it's process.  I've no problem with the authorities acting as "Lender of Last Resort", or the idea of their provision of liquidity as systemic backstop. But precisely "where", and "at what cost" should remain ambiguous to prevent the cleverly rapacious psychopaths amongst us from [trying to] test their boundaries and aggressively game it. In this regard, the fact that Yellen isn't yelling [specific certain forward policy guidance] anymore is highly appropriate.  Get used to it. Embrace it. And remain mindful of charlatans with strategies overly-dependent upon mindless extrapolation and leverage.
Posted by "Cassandra" at 10:25 am 6 comments:

Dear Mr Activist - What Have You Wrought? 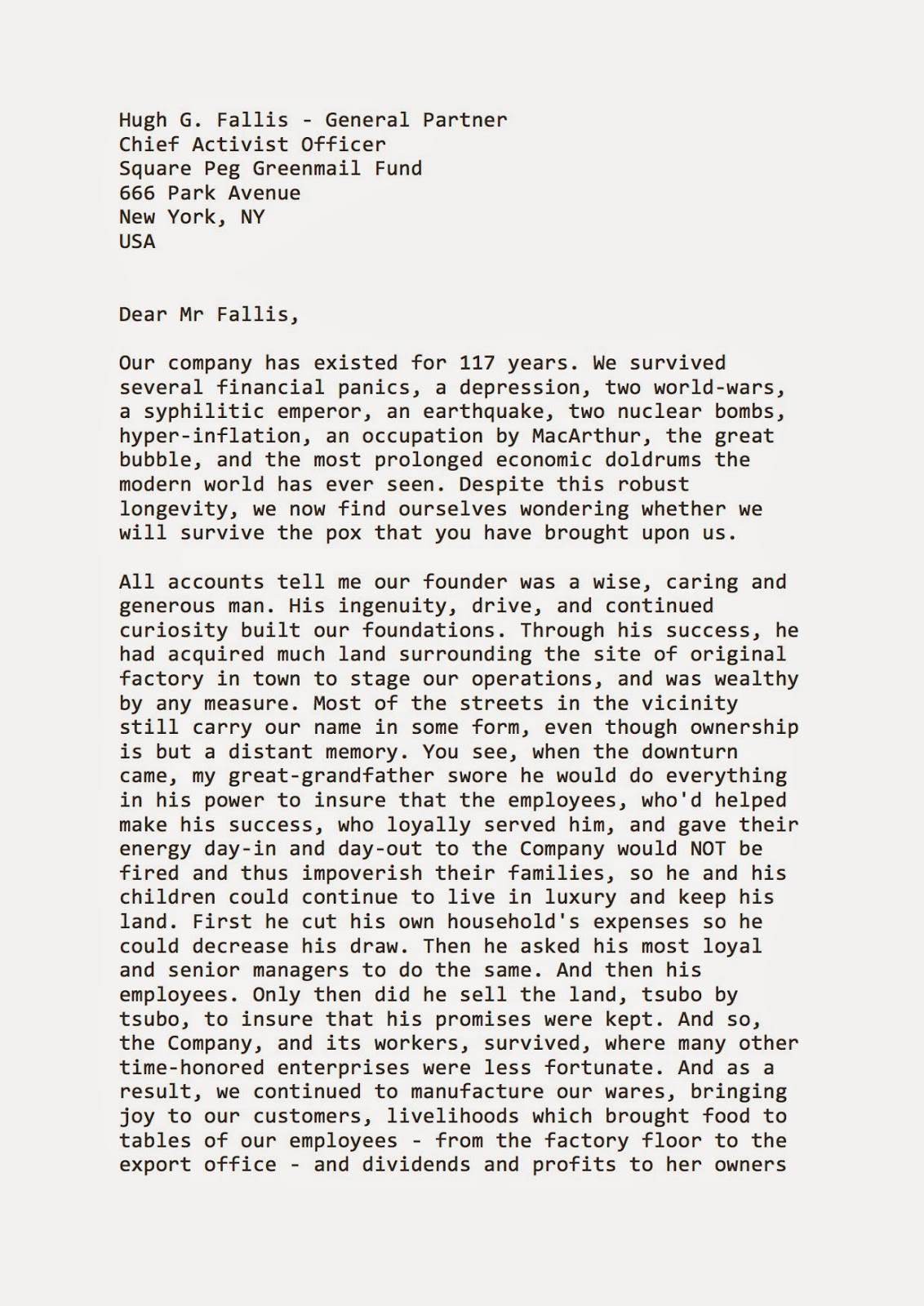 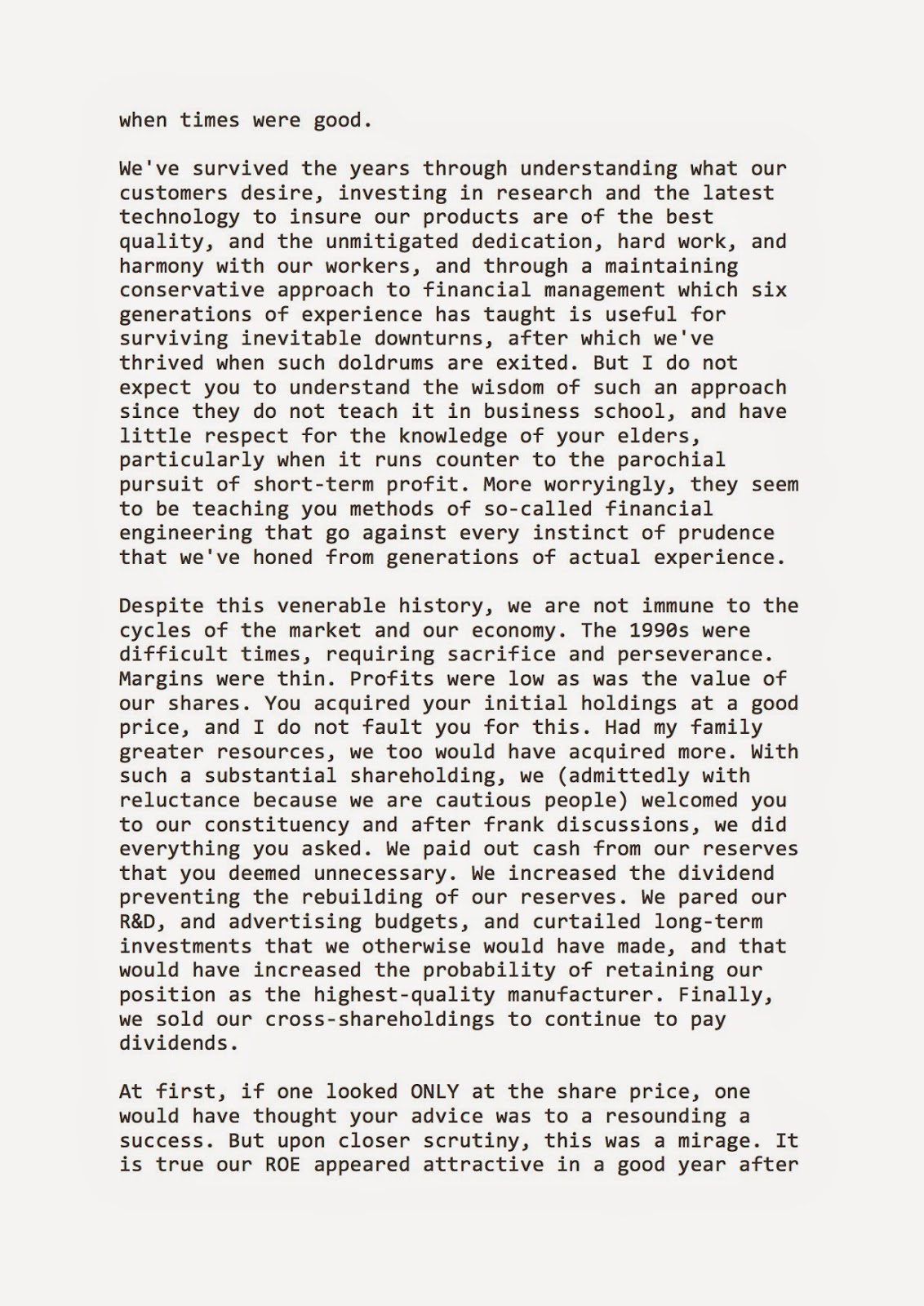 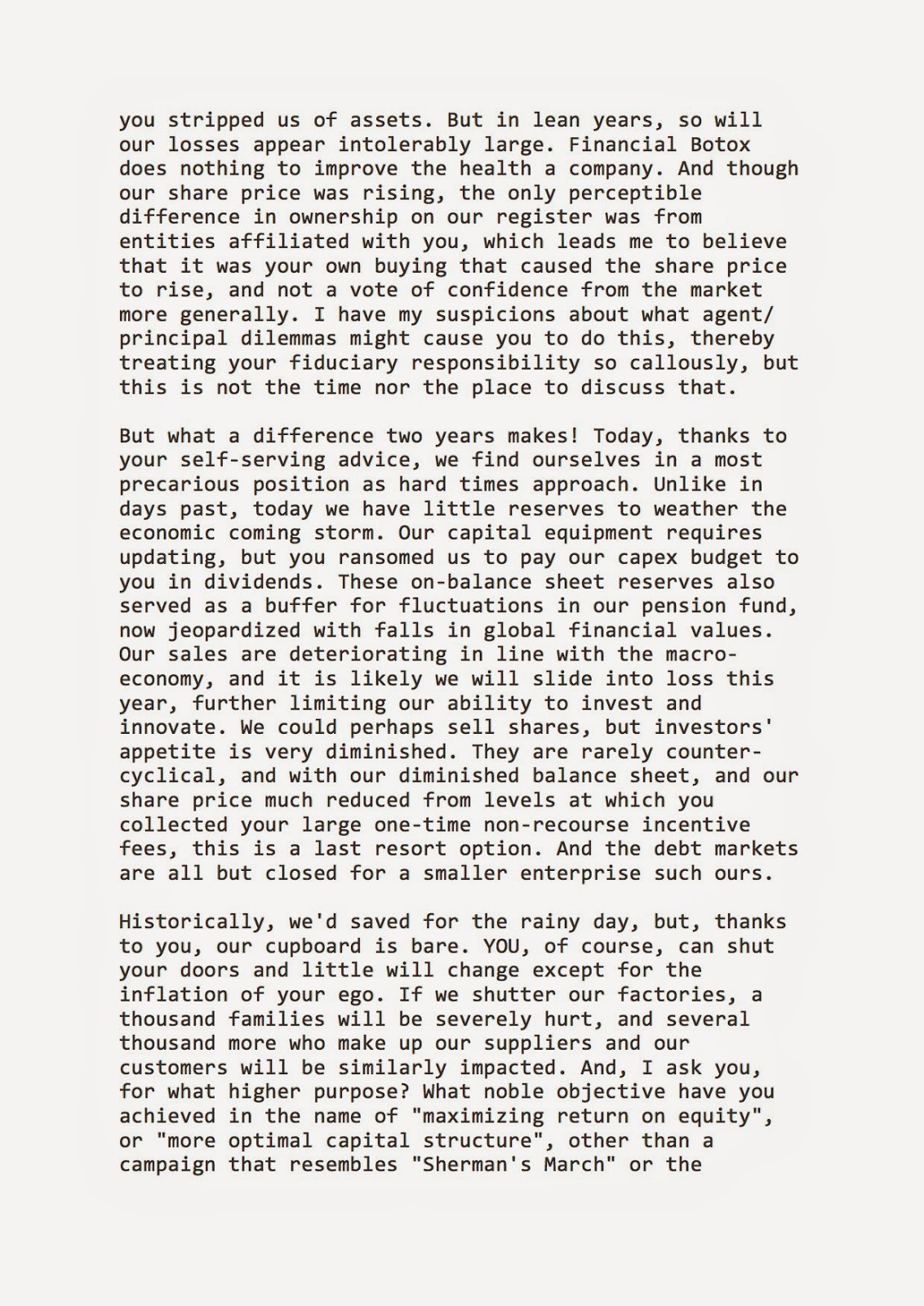 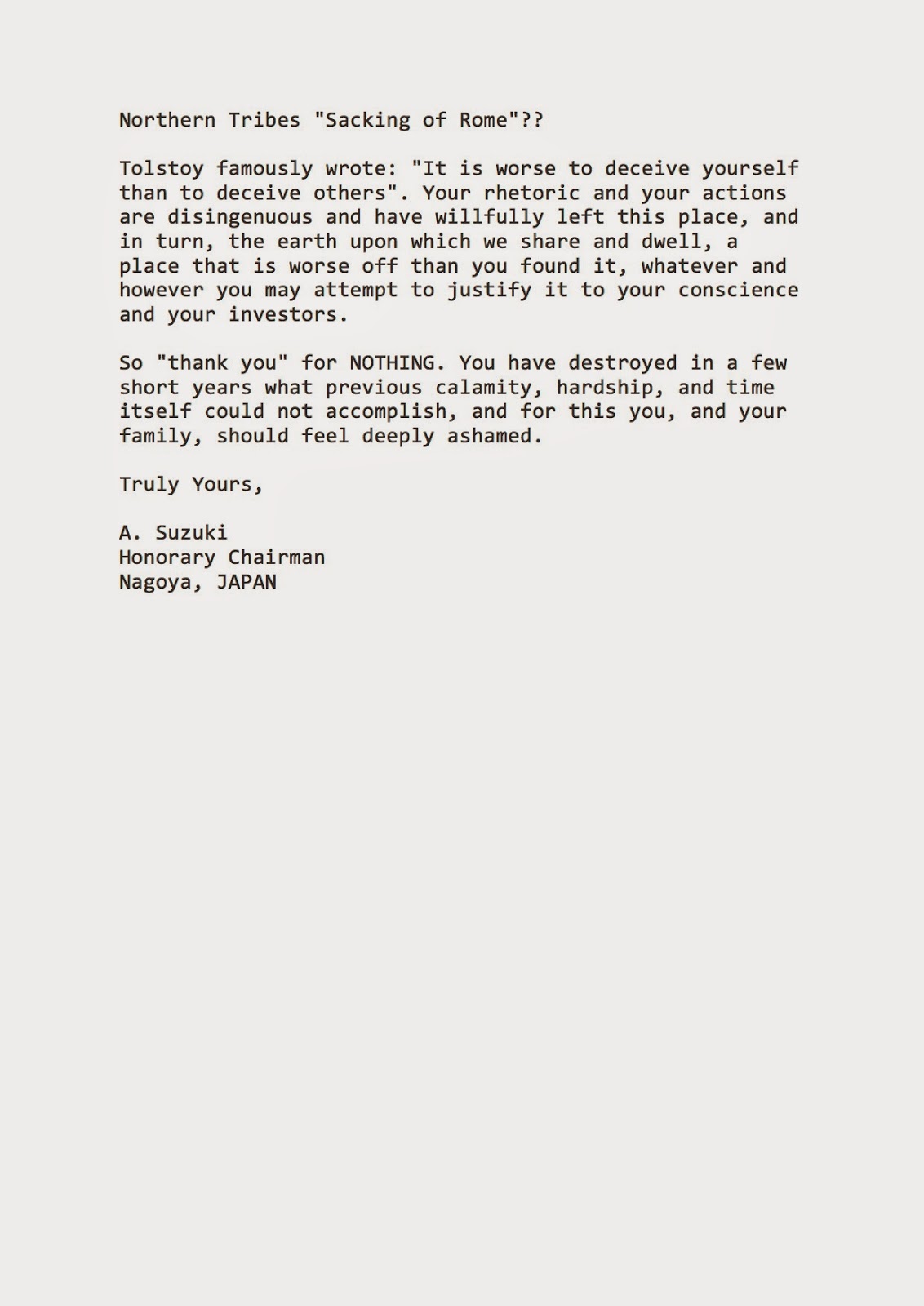 That FANUC Reply to ThirdPoint (in full) 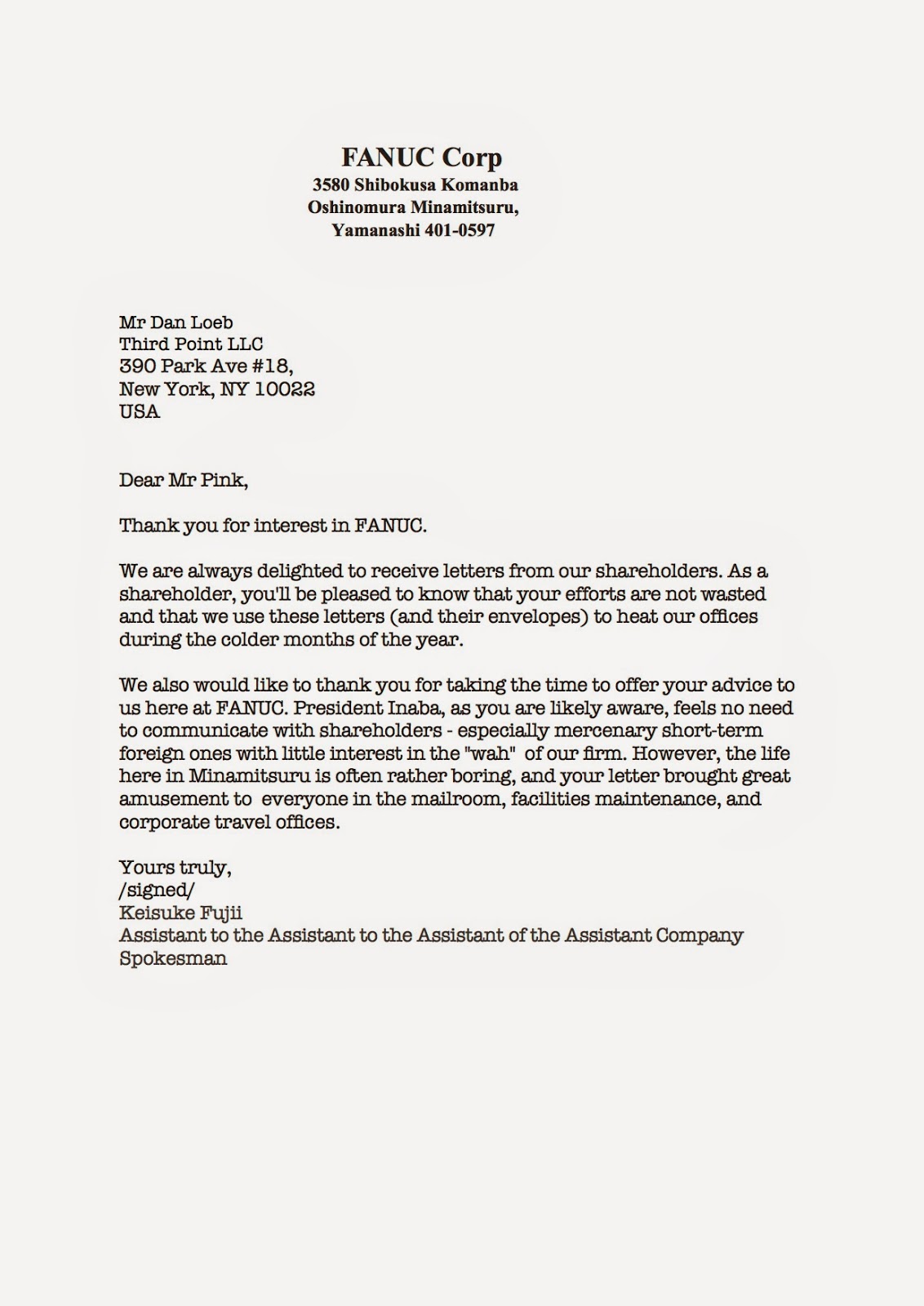 Giving is Easy - Taking is Hard

Despite the occasional satirical joke, I've never had a grave problem with QE. Like many other sober-minded observers, QE, seen in its temporal context, was one of the few available weapons to put a floor under floor asset prices, finance the large counter-cyclical deficits thus preventing the worst of a delveraging-induced revulsion and associated dislocations of unemployment and output gaps, in an otherwise spartan policy armory. The limited policy options were partly due to rates' proximity to the ZLB, partly because of the difficulty in building consensual responses in an acrimoniously-divided polity and, yes, partly because of the moral furore surround culpability four the crisis.

Though my concerns about tin-foil hat hyper-inflationary fears were near-zero, so too were my expectations that QE would be a panacea. QE, was, never going to be a cure-all, but was decidedly positive whatever critics may say - if only for psychological, confidence-boosting affirmation that the authorities would not stand idly by, holding their willies, passively witnessing a liquidationist resolution, however-much Austrian School proponents were hankering for one.

With memories of Japanese premature fiscal withdrawal still fresh, I believe history will see QE2 as a useful example of trying to avoid past policy mistakes, by making sure foundations of recovery were sufficiently strong before modulating countermeasures. In isolation, it will not be judged harshly. QE3, from the start, was seen by many, as more contentious, and I also agree with their reservations. Growth IMO was sufficiently on its way, and would, (again IMO), have continued similarly without further asset purchases. However, seen in the context of Euro jitters, the silly sequester battles, Arab Spring upheavals, QE3 should also be seen as the Fed's attempt to prevent large political uncertainties from systematically undoing the meaningful progress. And while I was, and am, concerned about the embedding of Pavlovian behavior, I believe there was (at least some) merit in their response and we should accordingly throttle our harshest judgements. The alternative outcome will remain hypothetical, but the actual result of continued growth, faster-than-expected fiscal consolidation, straight-line drop in unemployment and emergence of real wage growth is hardly worthy of too-severe recrimination.

Maybe one-day, social scientists will accurately factor-analyze the transmission mechanism. Was it the QE-induced, low rates themselves? the psychological boost of asymmetrical forward-looking asset-price expectations given a newly-communicated floor?; the asset price market values, capital gains and their multipliers resulting from QE?; the multiplier effects of seamlessly funding counter-cyclical government expenditure - both automatic stabilizers and pro-active stimulus?; or was it just the generalized normalization of economic activity by removing fear of A Great Depression and feared Zerohedge-like survivalist dystopia? I invite readers to offer their attributions of choice and associated weight of contribution.

Whatever one's attribution, no one can ignore the obvious cumulative result of QE and its interactions: asset prices far and wide have soared as a result of the policy, creating unimaginably-large "windfalls" to asset-owners through little cause of their own. Attempts should have been to "sterilize" at least a portion of windfalls - through targeted fiscal policy - partly for reasons of fairness and equity, and partly to deter the systemic gaming in speculative leveraged bets upon one-way economic and financial policy.

How quickly investors forget. If you'd asked large asset owners in late 2008, or early 2009: "Would you give up a tranche of the future capital gains in asset prices in exchange for a floor under prevailing prices, and the near-assuredness of significantly higher asset prices in the future?", I am quite sure of the answer, given the widespread systemic fears and paucity of alternatives at the time. Investors, after all, pay 2&20 to HFs and PE for essentially the same (pre-tax) premise. Was not QE effectively the same proposition multiplied across the entire economy? The liquidationist alternative was clearly unpalatable to asset owners, and sub-optimal for nearly everyone else. IF, as the result of a policy directive, you bestow large windfall gains, it would be only fair to harvest a an additional share of those for the Public's Interest, since the goal of QE policy was NOT to further stoke inequality, nor accelerate the growth of fortunes for existing asset owners, but rather to prevent unnecessary liquidation, and deflation so private-sector balance sheet deleveraging could work its course, and to foster stability, so reviving private investment decisions in the real economy. But, as it happens, giving is far easier than taking away - irrespective if you're a welfare deadbeat (not my language) or a leveraged rentier.

Pundits and critics from the right rarely miss an opportunity to point out the inherent difficulty of unwinding government programs and bureaucracy. It is a criticism worth noting. For bureaucracies and organizations often assume lives of their own and wills to survive long-beyond the sell-by date of the problem or policy purpose, defending their mission and rights to exist with intensity and vigor. Once laws are enacted and forces mobilized, introspection is a novelty.

Yet, the same pundits and critics refrain from similarly-inspired criticisms when it comes to the beneficiaries of QE, and the protection of their windfalls. It is baffling. The right, politically, hates QE, and all that it stands for, but surely all of Jim Bunning's or Rand Paul's tirades would have been put to better use to promote some sterilization policy that would ameliorate the less-desirable side-effects, efforts that would not damage their populist dogma (excepting perhaps their relationship with Grover Norqvist)

Asset owners peculiarly act as if such windfalls somehow resulted from their own brilliance. Many, through every over-leveraged fault of their own, were a pubic-hair's breadth away from financial obliteration, saved by US - and I don't mean the United States, but rather you, and I, as representations of the taxpayer, or bag-holder as the ultimate underwriter of newly issued debt. Others - particularly in the tech world and on the left coast - are blind to the benefits wrought by munificence of The People, and the abundant liquidity finding its way into every inane crevice, and spilling over to provide VC's and PE investors exits at multiples unimagined even three years ago. And the "thanks" that all those west-coast libertarians afflicted with self-attribution bias, is to piss on the under-class who serve them, and wish for a Randian offshore tax-haven to insure they share as little as possible with the undeserving multitudes. These gripes are academic, but asset-owners would do well to reflect upon their self-attribution bias.

As a markets person, my concerns with QE (particularly QE3) remain consistent with concerns expressed in the past at one-way CB interventions. That is to say, it likely creates a moral hazard whereby financial institutions and speculators lean on the policy backstop to front-run, lever-up (be it risk-parity; duration, credit), in ways that ultimately create more systemic risk, volatility, sowing the seeds for future dislocation, and likely requirement for public market stabilization [again]. Such hazard is amplified by lack of sterilization. I admit I don't know precisely how it might be implemented, or the optimal boundaries or details, just that fiscal policy deterrents would help diminish some of the negatives to society of one-way unsterilized monetary policy largesse gifted to large asset owners caught in the happenstance of monetary policy.