Yes, I admit that I am surprised, that The People are surprised, that Bank FX Desks routinely (and I emphasize 'routinely') predated customer orders. This is, judging by the long list of things diddled when People have the opportunity(s) and incentive(s) do do so, Standard Operating Procedure, endemic not just to Banks, but, more or less, I am sad to say, most of the human enterprise. Banks undoubtedly are eyebrow-raising, less for their routine seeking of advantage at others' expense (let's term this 'business'), but rather for the breadth and magnitude of their repeated gluttony in a profession where trust is, I daresay, rather crucial to the entire undertaking.

Yet, what I, personally, find most surprising about The Banks, and the cast of characters who run, and inhabit them, is that they are incredulous, and somewhat mystified, to the suggestion that people really do hate them. Take the case of one of the largest American money-center banks where an uncle of mine was engaged to help them understand how to exploit opportunities on their newly-embarked-upon course of "Bancassurance". Specifically, he was asked by their Board to help them understand how to cross-sell insurance services from their newly-acquired insurance arm, into their existing customer base. My uncle, being a pioneer in focus groups, and brand-extension, did what he does best: conductive exhaustive focus-group study of the issue and analysis before presenting his findings to the Board. His results were categorical. He told them, in no uncertain terms, they had almost no chance of selling their subsidiary's insurance to their existing customers. "On what basis?" they asked rather angrily. He said it was obvious: all his research showed that people HATE their bank. It almost didn't matter which one. Most people think the other banks are better than their own, so you actually have a far better chance of selling their subsidiary's insurance to anyone BUT their customers. Awkward silence ensued. Meeting was quickly adjourned. Contract abruptly terminated shortly thereafter. And (unusually for him) no further work from this giant Bank. The truth is painful, yet people in general, and it would seem, bankers in particular, go to great lengths to avoid it.

(NB: The American experiment in Bancassurance, like Mitterand's disastrous nationalization of the French banks was eventually reversed, the ill-informed "guilty" architects, of course, inculpable, and unpunished.)
Posted by "Cassandra" at 2:46 am 8 comments:

The following is a voyeuristic peek into a meeting of the Stamford, CT branch of "Bears Anonymous", duly held a Rippowam High School….recounted in 2007 and rediscovered, and ever so apt in 2014.

(Camera pans on participants taking their chairs , seated in a circle in a school room (a dozen or so men and women of varying ages. The moderator, a clean-cut optimist, who is always "fully invested" clears his throat and begins...)

Moderator: I'd like to welcome everyone this evening. I understand this is a big step for most of you: but the mere act of admitting you have problem is the first step to overcoming it. We have a number of new faces here tonight and I'd like to welcome all of you, as well as those who are returning. First and foremost, we are here to share our problems, support each other, so we can begin the road to recovery. Remember: there are many faces to our affliction, but the only requirement for 'BA' membership and attendance is that you must refrain from "going Short". In time, you may even learn to appreciate the liberating exhilaration of being long. (Moderator turns to early-thirties man) Let's start with you, Sir. Please Introduce yourself and begin...

I don't know where it first began. Maybe it was 1987. Yeah, that scarred me. I was naive, I guess, and long, and got slapped 20% that day in Oct 87. I tried to get out, but ended up exiting at levels near where it closed. A couple of years worth of savings just vaporized, that was!! But as things recovered, I was out of the market and then I didn't get back in because it looked to me like the world was really was going to end with thirld world debt, the S&L crisis, and the massive commerical real estate crash that seemed bound to cause a depression. Then, in 1991 when the UAL deal exploded - you know all those Reagan deficits coming home to roost - I thought that we were set for an ever deeper recession, but I was wrong, and again uninvested when the market started rallying. Come 1994, the bond market exploded and it looked like the end again - budget deficits, trade deficits, political gridlock and remember we were still working off the thriftbank and S&L issues, not to mention the near-destruction of the Texas oil patch and US agricultural sectors. Damn! If that wasn't enough to keep me out of the market, I don't know what is, but it did, and I was sure that I'd get a better opportunity to get in later.

Then came large cap cap growth and technology speculation. Germany and Japan were in near-depression, yet investors were paying silliest prices for big-pharma and global large cap growth. Who would thought they could continue to grow like that and justify the high prices? Not me. I missed it again.

All the while, I told myself: "It's ok. It's good to be prudent. The reckless will suffer like the Okies of the 30s. And, after all, it's only opportunity cost. Better one in hand than none in the bush". And I probably had a hundred other justifications and rationalizations for my bearishness, just in case I gnawed through these.

1998 came along and finally, finally, I was proven right with the unraveling of LTCM and bitch-slapping of Russia! Now we would witness the frightful reckoning, the deleveraging-yielding-to-parsimony that was needed to return assets to Graham & Dodd value and redeem America's sense of thrift! So I sat on the sidelines, waiting for the real blood in the streets that was imminent. But the Fed cut rates for fear of Y2K, the tech bulls ploughed ever-more money into the market. Some said don't fight the Fed, but I rationalized my bearishness that the Fed was "pushing on a string" and their efforts would have no effect.

The market did crash in 2000 - the tech and dotcom market anyway - and the broader market stood at 5 year lows, but I looked back to the financial history of the 30s and thought that when it hit its lows in 2002 that this could continue for a decade, especially with the Gulf War imminent and, with near-zero rates, it really looked like the Fed was pushing on the proverbial string. So I sat tight, waiting for a better entry point that was certainly around the corner.

Then weak dollar, credit bubbles, twin deficits, foreign accumulation of US reserves, muddling war in Iraq, incessantly rising energy prices and peak oil, and on each occasion - Aug 04, Mar and Nov 05, May and Nov 06, Feb 07 the market swooned, corrected, only to rally even more strongly out of the trough as if it were teasing me, taunting me, seducing me then mocking my now increasingly irrational fears and bearishness. And they were irrational, they must have been irrational right? for the market continued its inexorable rise on each occasion, laying waste to the rationalization or justification of the day for NOT being long long long.

In 2008, I felt vindicated. All my fears were realized. The world WAS going to on. It was so bad, I took all my money out of the bank, for fear of their collapse, and put it under my mattress. But be careful what you wish for. Things became so bad, I was afraid even money wouldn't have value, so I went out and bought gold (coins). Even the Fed rescue looked like it might not work. And then, there were new bank regulations which made it impossible to get a loan, all that shitty foreclosed housing to work through, and of course the EURO - oh my god - the EURO was bound to cause the biggest upheaval since the Panic of 1907, and Japan was imploding with deflation, while the Chinese were creating the largest bubble the world had ever seen. Would YOU have invested"??

It's taken nearly twenty-five years - almost the entire length of this grand new experiment in seemingly unlimited and unrestricted credit - for me to realize that this really and truly is MY problem. The world is just the world, and it's not going to end tomorrow, and that its better to suffer with the fools in the event the system unravels, than sit idly by and watch alone, a big pile of savings become a small pile of savings. Where o' where is joy in THAT?

In turning over a new leaf, and recognizing that I have a perpetual bearishness problem, I have terminated my newsletter subscriptions and vowed never again to watch or read Marc Faber, David Tice, Dr. Hussman and Fred Hickey. I will not read ZeroHedge, Peter Schiff, Max Keiser, anyone named "Rickards" and especially anyone like Mike Shedlock who wraps their politics so deeply into their strategy vision, they cannot possibly provide objective counsel. And I will make Investors Business Daily my read of choice in the financial markets. I will personally go and apologize to Abby Cohen, Vic Niederhoffer and Charles Gave for all those less-than-nice things I said about them. Further, I have vowed to place 50% of my money into a Vanguard global equity Index Fund, and also have vowed not to look at its asset value more than once a quarter. I have taken 25% of my funds and placed in them in a global balanced fund, and earmarked the balance for disciplined allocation on any subsequent drops, to momentum strategies. I have also asked my doctor to prescribe some little blue pills that will help me see the bright side of life, and stop being so pessimistic. And I have told my secretary NOT to hang up on salesmen that cold call for you never know when a good idea might fall on one's lap through a seemingly altruistic phone call. And I am going to stop all that stupid exercising and dieting in a bid to be "fat and happy", enroute to my ultimate goal of being fat, happy, AND lucky!! 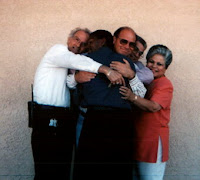 (applause of other members, camera pans on circle and focuses in on upon late twenties girl with tears in her eyes; Camera fades out, other members get up and give Chuck a group hug - but not a 'Bear-Hug'.)

(NB: While the author neither admits nor denies having a bearishness problem, the above account is entire (well, mostly anyways) fictional.
Posted by "Cassandra" at 6:43 am 3 comments: