RESPONSIBLE. (rI"spQnsIb(@)l) American Heritage: Adj. Liable to be required to give account, as of one's actions or of the discharge of a duty or trust. Involving personal accountability or ability to act without guidance or superior authority; a responsible position.

When I was 12, I was charged by my chemistry teacher with responsibility for fetching the chemicals required for our collective experiments from the secure storage room down the hall. One day soon after, in the privacy of the storage room, having absorbed just enough chemistry to dangerous, I tested a theory of mine: if I mixed 1 part HCl (hydrchloric Acid) with 1 part NaH (sodium hydroxide), the Sodium should bond with the Chlorine to become NaCl, and the two hydrogens would bond with the leftover oxygen giving me....table salt and water. I took out a large beaker, measured out the sodium hydroxide tabs, then carefully dispensed the highly potent hydrochloric acid, then slowly poured the it on the tablets. WOW! First it bubbled and crackled. Then came some smoke followed by violent shaking of thte beaker, and then a denoument of a small explosion that sent the beaker into shards propelling bits of the mixture all over, including me! Dumfounded, but undaunted, I cleaned it up as best I could and returned to class. The teacher immediately inquired what had taken me so long. I began to mumble something or other when he asked what the large gaping and rapidly expanding holes on my clothes were. I was B-U-S-T-E-D as busted could be. As I was caught red-handed, it was pointless to do anything other than explain what I'd done, admit that with hindsight it was stupid, and apologize for the transgression and especially the breach of trust. Unlike Clinton, I was stripped of my responsibilities, served with several detention notices and a wad of demerits, and my mother was called mostly to replace my clothes which had by now dissolved rather alarmingly into what looked like rags that happened to be stitched together by a very amateurish seamstress. With my clothes and my career as a nobel-prize winning chemist in tatters, I set my sights on a more intellectually modest target: finance. 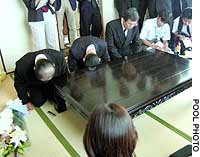 Pictured to the left are the senior managers of Japanese truck-maker Mitsibishi Fuso. They are seen here deeply and profusely apologizing to the family of a victim who was killed in a 2002 accident that resulted from one of their vehicles inadvertently dropping a driveshaft (due to systematic manufacturing defects) thus severing the brakelines of the vehicle and causing the crash. Honor and responsibility are important and deeply ingrained in Japanese culture, though they may be reserved for Japanese since thhey seem to have such difficulty acknowledging their own history across Asia.

But like me, they too were caught red-handed. And reassuringly as one should do when one is confronted with the uncomfortable reality that one's actions (whether individually or collectively) are wrong, harmful, or deceitful, one 'fesses-up. And takes responsibility. And apologizes. Like so many Japanese before him or her. Like the Truth & Reconciliation Commission demanded of the army and secret service in South Africa. After which people can then, hopefully, put it behind and look forward. If Enron had happened in Japan, the Chiefs of Arthur Anderson would have taken full responsibility for their part, apologized, resigned (prior to trial and probable incarceration). In the proces, they would hope to remove the stain from their many untainted colleagues, and in the process help restore the reputation of the organization by effectively self-excising the cancer from the organization and thereby saving the livelihoods of the loyal ones who'd served honorably and faithfully. 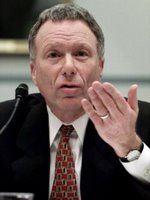 By contrast, pictured to the left is one Lewis "Scooter" Libby, formerly one of the most powerful lawyers in America (as Managing Partner of Dechert's DC office), formerly the Chief of Staff for President Cheney, who is by now both a household name and face. Mr Libby is seen here apologizing to ... errrrr ... ummmmm NO one and accepting repsonsibiity for errr ... ummmm ... NO thing. Nada. Zero. Zippo. Rien de tous. But this is America, and Mr Libby is entitled to, and will have his moment in court with special prosecutor Fitzgerald before receiving his Presidential pardon. (Ironically Mr. Libbby represented the case for pardoning Marc Rich to then President Clinton! -Ed.)

But my somewhat rhetorical question of the day to you is: Can we really "blame" him for not owning up? My answer is: "probably not". Not because he isn't slime (since he IS slime for violating our trust and lying to our representatives of justice). Not because he doesn't deserve justice (he does! and I am ever-so-hopeful that justice for knee-capping Joe Wilson while on MY payroll and on MY time, involves at least some quality-time in a cell with horny child-raper, Du-Wayne, in C-block). But we can't "blame" him, because he is merely a sad product and cariacature of the less-than-honorable side of American culture. This is not a partisan issue. Clinton wouldn't own up to getting his pipe smoked by his intern ("I did NOT have sex with that woman..."). Bernie Ebbers, Jeff Skilling, Richard Scrushy, Jack Grubman, Tom DeLay, OJ Simpson, Ted Kennedy (whatever happened Mary Jo K.??) and yes, even our President who couldn't muster up the courage to admit he snorted coke in the White House when GHWB was in charge. Or 'fess-up that he ducked out of most National Guard duty time and was wrong and ill-conceived about Iraq and WMD. But I repeat, this is not partisan, this is cultural. Can you just imagine for one moment just how blue the sky would look, or how fresh and crisp the air would seem, if you woke up one morning and heard that Scooter had resigned of his own free-will, and that he admitted that it was wrong - not to mention dishonorable - to rub faeces all over Joe Wilson and disrobe his spouse, and that it was not in the best interests of democracy or the country, and then, waiving all legal rights that he might be entitled to, "in the interest of truth and reconciliation", hear him declare that he was indeed guilty of lying and of obstructing justice, and that he and "the as yet to named, but who everyone knows who they are others" sat long and hard on many mornings, throwing back brandies with their coffee while thinking of devilish ways to impugn Ambassador-Joe. The thing is that, in order to save his own sorry ass, and the asses of the other sorry asses, he has willingly, knowlingly and intentionally shamed the whole nation and our government expelling one huge symbolic fart in our general direction.

Here, pictured to the left is Koji Kitano, head of JCO Co. Ltd., the manager of a government Nuclear facility that was the scene of Japan's worst nuclear accident. With the deepest of bows (nose, knees & feet to the floor), he expresses "mea culpa" extending the deepeest of apologies to the families of the victims. Despite the protestations of conservatives and triumphalists, there are clearly some things that we can learn from "foreigners".
Posted by "Cassandra" at 4:08 am