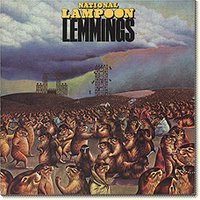 Animal metaphors are abundant when it comes to describing archetypical investor behaviour. Few are as visually exciting at that portrayed by L. Lemmus (the Common Lemming). Conjure an image of hordes of investors falling over themselves to acquire shares in JDS Uniphase, Northern Telecom, or Global Crossing, (or for our Japanese friends Softbank, Trans-Cosmos, or Jafco) during the bubble only to realize that, like the notorious lemming, they have been led over the edge the cliff, and that their portfolio is now in financial free-fall enroute to oblivion.

Demagoguery whether political (such as neo-conservatism) or financial (like the Lemming imagery) is insidious because it is - at first glance - plausible, preying upon fear and ignorance to influence potential adherents. Both the current US administration and the lore of L. Lemmus are no exceptions. While I cannot with sound conscience defend Bush & Co., I am able to come to the defence of the Lemming and her otherwise soiled reputation.

The first thing that must be higlighted about the metaphor is that, insofar as it pertains to equity markets, there is apparently nothing wrong with either being a lemming, or acting like a lemming, because it seems that, in financial terms, the lemmings know where they are going and what they are doing. Almost all momentum research confirms that "being a lemming" doesn't impair your wealth. For if you bought last year's "winners" and sold short last year's "losers", you would (over time) have made a reasonably positive spread return at most intermediate-term forward holding period intervals. This is bog-standard MBA coursework in financial anomalies. This will come as a relief to those who've been trying - without success - to figure out the mysteries of how to play the stock market. What remains a mystery is "why" being a lemming produces financial something out of financial nothing. Some say the market underreacts. Some say it overreacts. Others say it underreacts then overreacts. Still others say people just behave badly. I personally sympathize with those that say that "markets have important things to tell us", though I also think markets are prone telling us those things to great excess especially when appropriately cajoled . This says the word Lemming - like the often derisory term "Liberal" - should be seen as a badge of honor and proudly defended rather than viewed as a piece of chewing-gum stuck to one's shoe.

Equally important in defending the reputation this small (and cute) member of the rodent family is to debunk the myth popularized nearly half a century ago that lemmings are stupid and unwittingly commit some form of mass-suicide. Thanks to recent research by University of Helsinki population biologists Olivier Gilg, Ilkka Hanski, and their colleague Benoit Sittler of the University of Freiburg, the mystery has now been been solved. Scientists have known that Lemmings don't actually commit mass-suicide, not in response to over-population, nor by following each other over cliffs, or by any means for that matter. This fiction was implanted in the popular consciousness by Walt Disney's 1958 film "White Wilderness", and was reportedly (though unconfirmedly) staged by the production crew who alledgedly chased them over a cliff wielding brooms. 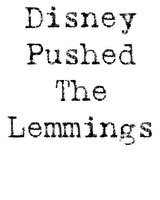 What IS real are the periodic cyclical population explosions of lemmings (sometimes increasing by 100-fold), and their subsequent rapid decline. But scientists never knew precisely WHY the populations dwindled after such massive expansions. Thanks to the careful observation of the nordic researchers, it has now been confirmed that the subsequent rapid dwindling are due to the quick responses of their main predators AND an increase in their rates of predation, the combination of which can reduce the lemming population by upwards of 2 to 3 percent per day! Though the original myth of mass-suicide was induced by hundreds of years of periodic sightings of numerous dead lemmings (typically around water) in Scandinavia, these apparently result from routine drownings during otherwise routine migrations, as they move through the swamps and lakes in the north. Lemmings, while good followers, are appparently poor swimmers.

Make no mistake: while I come to the defense of those who are unable or incapable of defending their interests (like the lemmings or the disenfranchised), and while I will point out the scientific evidence that "sort of", "kind of", justifies the actions of people who behave like lemmings, I am NOT a lemming, nor do I recommend any such mimetic behaviour. For while there may indeed be some abnormal economic returns to investing like a rodent, there are better ways to make a buck. I, for example, have been able to extract higher returns with far superior risk characteristics by selectively taking the other side of many of their trades. Just because there is no dishonor in being a lemming, doesn't mean one should blindly emulate them.
Posted by "Cassandra" at 10:20 am