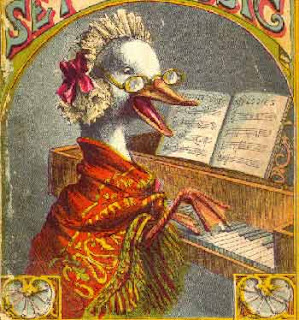 Hello all. It is a lazy Sunday. And so I thought I'd share some amusement between finishing a great read "My Father's Island" (which only took six years to get around to finally reading from Galapagos trip), and the springtime yard work which awaits...

HUGE DIDDLE DIDDLE
Huge diddle, diddle,
The CFO fiddles,
The 'counts to be released very soon;
The CEO laughed
To see the report,
Knowing his share price will be launched to the moon.


I SAW A MAN A-TRADING

I saw a man a-trading,
Trading on the CME;
He thought he was so clever
When his winnings he could see !

He dreamed of comfits in his cabin,
And Red Ferrari's he might hold;
The clothes which would be made of silk,
And buckets filled of gold.

But short four lacks of silver
And a billion of the dollar
levered huge, Without a stop,
Felt like concrete upon his collar.

So the man-a-trading,
now empty was his sack;
Said to his investors,
"Just one more - I'll make it back!"

Old Warren Buffett
Sat on his tuffet,
Eating the turds that others threw away;
Along came a prosecutor,
Querying bogus finite deals and ummm errrr,
Frightened Mr Buffet ran away.

[ed.: leaving Ferguson to the wolves...]

Old King Coal
Was a very cheap fuel,
And a very cheap fuel was he;
He smoked from all pipes,
dug up from earth's bowels,
setting tons of CO2 free.
Each burner, he had a riddle,
And a very fine riddle had he;
"Is there nothing that's clean and as cheap??!?" ,
Oh, there's none so rare,
As can compare
With old King Coal and his cheapness thee!

A Trend is like an onion:
You taste it with delight;
But when it's gone you wonder,
Whatever made you bite

The SEC doesn't keep, the safety of peeps
in sight, in order to defend them;
They left their charges alone, so they could hone,
multitudinious ways to fleece 'em.

The SEC didn't peep, since they were asleep,
only dreaming of frauds committed;
But when they awoke, they found it not a joke,
For the customers were still being pilfered.

Then up they took, their little crook,
Determined for to find them;
They found them indeed, but it made their heart bleed,
For Goldman had deleted all their e-mails behind them.

Please feel free to contribute your own....
Posted by "Cassandra" at 5:51 am

now I know why they were Grimm ...

There Was a Crooked Banker

Their once was a Bank in Nantucket
Whose mortgage book was so bad
They said "fuck it"
So they set up an SPV
That no one could see
And paid S&P to ignore it.