Awe and Wonderment (A Brief History of) 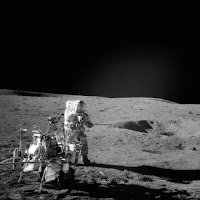 On October 19, 1987, I was driving home from work looking across the bleak industrial landscape beneath the Pulaski Skyway, with its flat-black stealth paint absorbing the last light of the day. Traffic moved normally, despite the momentous events of the day. No one was stopping to leap into the abyss below. I'd printed a Quotron sheet detailing the carnage for posterity. Jim Grant was being interviewed on NPR (rightwing rage-a-holics were as yet non-existent, and the Beeb unavailable on US mediumwave). I'd stopped by his office to see him only weeks before, admiring his the large taxidermified bear which was the centre-piece of the main room. He spoke with characteristic clarity, analyzing not the cause, but rather articulating upon the awe and wonderment that define markets. I hear his words in my head as if they were yesterday.

The failure of the UAL buyout but a few years later caused a similar albeit less-manic panic, but HAL's cables had been disconnected, and L.O.R. disgraced. It was mostly the risk-arbs and short-premium option market-makers who were skewered. Wondrous awe was perhaps the most apt description again in fall 1998 when the Yen moved fifteen big figures overnight as puked carry trades presumably pushed other short yen positions over the get-me-out precipice. "Shit happens", it must said. So "Leverage is poison!" became the watchword, (for a year or two). The tech-wreck was tame and in slow-motion by comparison. Reality bit slowly, and in any event, the bear market in most stocks began in 1998. The melt-up was the thing most noteworthy. The tail end in fall 2002 displayed some pyrotechnics, but these were at the individual stock level, and (perhaps rightfully) reflected the portfolio craters once Enron, WorldCom, and Adelphia (to name a few) once filled.

Despite various spikes, dips and swoons, it wasn't until the summer of 2007 that "awe and wonderment" were again applicable. Crowded trades, too much capital, too much leverage, and evolved (not necessarily for the better) market mechanisms conspired impale many naive and/or overconfident quants to impale upon the proverbial hot-poker - one that remain stubbornly lodged in its orifice causing the largest continue delevering and amplifying the cascade for quarters more until being overshadowed by Peak Credit its profound private deleveraging and transfer onto the public balance sheet. This need not recounting since the blogosphere was fully oiled suffice to say the authorities prevented further feedback-induced cascade selling of position to make position that would have led to even deeper systemic financial insolvency.

Again, last week, "awe and wonderment" were apt descriptors of the action (or lack of it) in the S&P and Euro-Yen cross. More than 10 handles on each in a seeming vacuum during but a precious-few minutes. Ouch!, indeed. Most leave school thinking markets (of major instruments) more or less infinitely broad and deep, with multitudes of participant types - each with different opinions, yielding liquidity functions that draw out size deepening bids or offers the more price moves, thereby dampening volatility. Except when it doesn't. When "shit happens" as it inevitably does. We live in a brave new world. A world where black is white and where white can be black at the flick of a switch (or the triggering of threshold panic response in an trading strategy or risk-management algorithm). Predatory sniffers intensify their efforts. Normal buyers are forced to puke and become sellers. Further stops are triggered. More systematic trend-following programs are triggered initiating new positions in the same direction. Normal liquidity providers suspend activities. It is the market equivalent of Alan Shepard's six-iron drive on the gravity-less moon, prices untethered by buyers and sellers knowledgeable of their transactions. And one watches with awe and wonderment, at the edifice which has evolved, quite certain that this is the shot across-the-bow exposing the inherent systemic instability of the machines, who are only as good their young masters.
Posted by "Cassandra" at 2:19 am

I think finding your Santander short 20% in the hole Monday open may qualify in this regard.

I was in NYC on Thursday discussing long duration infrastructure debt with a good sized insurance company. At around 2 PM the discussion turned to liquidity and I said. "We underwrite for a hold, if liquidity develops that would be nice but it is not something you can count on"
I didn't find out until an hour later just how accurate that was....

Long Duration scares the sh*t out of me as much as crowded trades with fickle liquidity...

just think of those sinking ferries where everyone rushes to one side of the boat to...

Chicken !
but yes it should scare people all the time
just think how long the duration is on most equities....

...which is why, as a point of departure, one better have an advantageous real earnings yield, reasonable real growth, an implied index-hedge to inflation, or all of the above.

but enough shop ... so when are you going to write some prescriptions-
How should we get out of this mess ?

It's okay to tell us where to go - after all it turned out well for your namesake...

cassandra says, "And one watches with awe and wonderment, at the edifice which has evolved, quite certain that this is the shot across-the-bow exposing the inherent systemic instability of the machines, who are only as good their young masters."

I love the machines. Periodically, they act broken and stupid, and you can sell them "safe" positions priced rich. Happy days.

Paragraph 3 needs a touch of editing.

Seriously, dude, you need to pay attention to the language. I gave up reading this because it got too incomprehensible. Too bad, because it was kind of interesting.

Not a bug but a feature, a full length creature feature. Amazing what they can do with CG these days.


The Rise of the Machines

But we are suggesting neither that the human race would voluntarily turn power over to the machines nor that the machines would willfully seize power. What we do suggest is that the human race might easily permit itself to drift into a position of such dependence on the machines that it would have no practical choice but to accept all of the machines’ decisions. ... Eventually a stage may be reached at which the decisions necessary to keep the system running will be so complex that human beings will be incapable of making them intelligently. At that stage the machines will be in effective control. People won’t be able to just turn the machines off, because they will be so dependent on them that turning them off would amount to suicide.

October 19, 1987
No CNBC; for mere mortals your business fix came from PBS and the Nightly Business Report. Here is a link to that episode. (there's even a cameo by Cavuto and in one of the episodes Kudlow)

A nice walk down memory lane...
I'd expect further volatility until the Goldman, etc. investigations are put to bed. It makes no sense for any of the potentially affected firms to increase VAR at a time of pending indictments.

And as for the monkeys that sold stocks down 90%, I'd guess that letting the trades stand, rather than busting them, would have been the most effective way to prevent a repeat performance.

I seem to remember 1998 more vividly than 1987. That was probably because money mattered more in the 90s (that's when I was earning my own), and also because I happened to be living in Asia when the meltdown began. Some cycles seem to repeat themselves with curious regularity/similarity.