The Forest & The Trees

All too often, one's sense of perspective can get lost. Occassionally this results simply from the passage of time, while in other cases it is the result of deeply held opinions that one cannot jettison or merely happenstance that has in some Darwinian way, survived. Whatever the cause, accurate perception of current reality may be the resulting casualty it occurs.

One such example is the 10-Year Japanese Government Bond ( the "JGB"), seen here depicted in yield terms (courtesy of Bloomberg Professional) in the chart below. 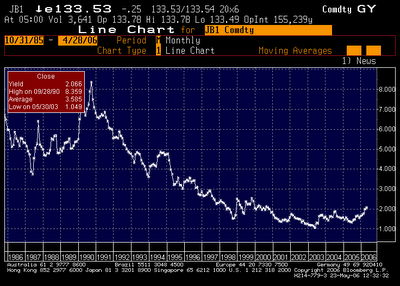 The JGB's yield (if one can really call it yield at all) has been SO low, for SO long, that people have stopped questioning whether or not it should be yielding thus. They have been ground down, and rather are worn out. In this respect, the MoF has won. But the cruel irony of financial markets is that the game is NEVER over. They have won but a round, an inning, a frame (maybe even several), but not the game.

Some of you may then ask: "where it is going from here?" I would suggest the answer is rather obvious, jumping off the page. So obvious (when one looks at it from afar) irrespective that people have stopped asking the question of it's proper yield; ignoring that hedge funds have stopped shorting it; and despite the sight of the BoJ AND the MoF patting each other on their backs in salute of their "victory" over trade surplus-related YEN appreciation, one's conclusion can only be that JGB yields are going higher. And they are going higher, make no mistake, because of six-years of ZIRP and 7%-of-GDP fiscal gaps. Just look at it for a moment and ponder the possible alternate realities of the future. 4% (at least!) by the end of 07' is my variant vision of the future.
Posted by "Cassandra" at 9:36 am