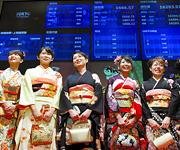 Nomura securities reported yesterday that the BSPC (Banks' Shareholdings Purchasing Corporation) suspended new purchases as of the end of April 2006, though it may continue to puchase securities for it's general account up until the end of the window permitted by its articles of association. This follows nine rounds of purchases of shares from Banks that commenced in Feb 2002 up through the present - most of which were cross-held shares that financial institutions desired to get off their books to minimize the variability of their core capital due to the vagaries of share price movements.

To date, the BSPC bought an aggregate amount of YEN 1,586.6 billion (at cost) worth of shares (USD$14.3 billion at today's exchange rates). This is only a smaller part of the total shares bought by the various Japanese authorities and agencies (including the Daiko henjo pension givebacks; the Bank of Japan's purchases (The DIC - Deposit Insurance Corporation) from failed financial institutions, as well as those whose ownership was assumed when other failed institutions were nationalized. But if you think this was a charitable undertaking - think again. Impressively. the BSPC is believed to sitting upon
YEN 1,000 billion of unrealized capital gains, making them one of the wildest financial gunslingers in the world surprassing the HKMA's feat of buying copious amounts of stock to support the market during the Asian Crisis of 1998. Yes, that's right, YEN 1 Trilion (USD$9 billion in market-to-market gains at this morning's exchange rate.

So will this stock find its way onto the market anytime soon, and rain on the bullish party sweepiong Japan? Legally, the Corporation must be dissolved by 2017, and they claim to have no immediate plans to sell stock. But if you're looking for a large line stock, perhaps you should give them a call...
Posted by "Cassandra" at 10:08 am

Am I to understand keiretsu is alive and well except brokers have taken over the role of banks?

BTW, when do you think carry trade will end? The obvious answer is when BOJ raises rates until it's no longer profitable but what is BOJ's current line of thinking?

1. Keiretsu is alive and well in Japan. It is cultural rather than economic. V2.0 is simply slimmer and disposes with the most frivolous relationships (i.e. the toilets can be cleaned by the lowest bidder, and not required to be cleaned by an equity-method affiliated co).

2. The carry trade will end two years ago. Ooops. I guess I got that wrong. Who would have thought the FRB would remain so behind the curv e with ongoing-ZIRP, raging Chinese demand, and fiscal policy out of control? Not me! I used to have respect for them....

I must say your blog gives a different perspective of how the political economics is played inside Japan. May I complement your blog as having a "variant perception", as Michael Steinhardt calls it, of Japanese markets. A bit rambling at times, but what the heck, it's blog.