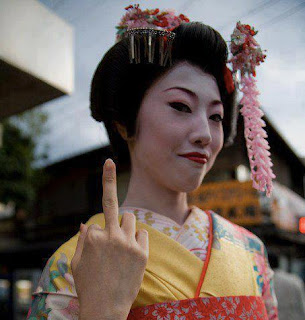 It should surprise no one that Sony Corporation, an icon for Japan's collective successes and failures over the past two decades, has rejected Dan Loeb's suggestions for helping the company's share price out of its funk. Anyone who thought otherwise (and is in the investment business) should - without haste - commence with a search for a new occupation. Or at the very least, a new regional specializiation. This is not to suggest that changes is not occuring in Japan. They are. Quietly if not steadily, though more often in fits and starts, and most frequently in response to calamity rather than the not unsensible proddings of a wily and reasonably successful gaijin operator (who is NOT Warren Lichtenstein).

Even if Mr Loeb's suggestions were as tempting as Hello Kitty! to an adolescent girl or Zizzi Hikaru to a video-game-addicted freeter, it simply is not possible for Sony to be seen to accede. Sony remains a vanguard of Team Japan, with a deep and broad web of obligations. For right or wrong, obedience to Mr Loeb's demand disturbs the calm stability at the center of these relations and throughout the web of obligations, and would set a precedent that would not go down well with the broad constituencies that comprise the Team. Moreover they (unlike humbled Shinsei) don't have to (at present), for there few greater regrets in Japanese finance circles than the sacrificing of Shinsei. Bloodbath that Sony has been for shareholders, it's hemorrhaging is still no Sanyo. Moreover, it is horribly "bad form" (in Japan) for shareholders (let alone gaijin shareholders) to make public demands of management umm... errrr... "allies". The greatest sin  Olympus' Woodford made (in the eyes of colleagues, bankers, and Team Japan) was airing the the family's dirty knickers in public. When confronted publicly, the answer will ALWAYS be "Fuck-Off", irrespective of the question.  When the same is asked privately, the answer will also be "No". However, for those focused on outcomes, rather than the immediate triumph of submission, the private approach (at the very least) allows the possibility of preserving a semblance of honor. Time and utmost supplication allow an idea to be appropriated by the Team, or through the hierarchical chain, to the Team Leader, as custom and history demand it be done. With patience, if the idea truly has merit, and, if it survives the convulated cost/bĕnefit equation [strikingly different than our] that confronts Japanese public corporate management, the idea may re-emerge, as an internally generated concept, now wholly appropriated. Only then, can it be pursued, once internal consensus is built, once vetted externally by those who are directly and tangentially impacted, or connected. And never, never, never, with an observable direct link between external coercion and ultimate action.

I am neither defending nor excusing TeamJapan. It just is. It may not remain so, and perhaps Mr Loeb is out to hasten the change - something TCI and others have never been to do excepting the weakest of sacrificial lambs. However if you spend a couple of billion (dollars) on a punt, then I hope (for Loeb's investor's sake) he:  (1) traded the position "Einhorn-style" (or at least wrote options on the position) in the run-up reaction to the ruckous you created, or,  (2) Insure the duration of your capital, and hedges against "shit happening", are sufficient to patiently wait out the long journey for your "suggestion" to be assimilated and appropriated. Until then, TeamJapan's Geisha will convey TeamJapan's heartfelt reply...