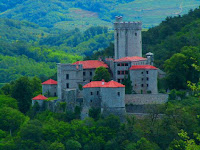 Many wise observers and practitioners from Keynes and Triffin to Roubini and Grantham have thought of Gold as a barbarous relic. Let it be said, to the delight of Goldbugs, that I frown upon such a pejorative (at least for the duration of this post). Gold is championed as a store of value because as Goldbugs rightly point out.... it's always been a store of value. No need for further elegant rhetoric with such an historical pedigree. Circular, yes, but circularity is of small consequence in the search  for a universal store of value (so long, perhaps, as one leaves the little chestnut  called "price" asides). More pessimistic zealots, of say the Goldline variety, suffering both political and economic disillusionment, fear the worst Orlovian outcome - the one where BOTH politics and economics yield to chaos, (and for those so inclined if prophecy be requited, thereafter The Rapture). Gold - along with guns, ammo, and canned spam (not necessarily in that order) is seen as the best hedge of the former while "Just saying No!" may facilely suffice in the latter.

For the moment, I will not question the foundations of the fears that Gold fulfills, nor will I question the time-honored pedigree it has acquired through history. But in my travels this summer I believe I have found another [possibly] ignored asset that should  be considered by both the fearful and disillusioned alike. Quite simply, I am thinking of Strategic Castle Fortifications. More specifically, those which are typically perched above or adjacent to strategic trade routes and valley passes for they more than others benefit from geographical positioning, at least as rare if not rarer than the yellow metal itself. Whether at the mouth of an ascending pass through the the mountains, or an entrance to a fertile alluvial valley between hills, or above a narrows in a trafficked river, such fortifications have extracted rents in time-honoured fashion since man was able to construct them.
It is hard to fault the quality of their materials as they were built to withstand both siege and full frontal assault. They boast excellent visibility for offensive and defensive manouevres, vast arrays of dungeons to imprison (and for the less politically correct amongst us, perhaps to torture) one's adversaries, as well as to cellar requisite libations to accompany the sunsets. Admitttedly it costs a few krugerrands to redo the roof, but that is true of any substantial villa or mas with a reasonable patina and square-footage beneath. Of course quality and utility aren't everything. Many of these fortifications sport some of the finest views and scenery in the land. Yes, the strategic routes beneath them have now evolved into autoroutes, autoipistas or autobahns of 6 lanes or more, with all manner of household and commerical traffic passing at great speed. And The State rather frowns upon abusing their full geo-strategic potential  but during more backward and less progressive historical times, the return of which the fearful are most afeared, these could be seen as giant tollbooth - a function to which like the hopes invested in Gold - they might readily return.
But the similarities to Gold do not stop with their historical, novelty, and aesthetic qualities. Much to the Goldbugs delight, it takes great effort and expense to excavate and elevate such a fortification and engineer it, just as it takes enormous earthmovers and energy to coax the miniscule concentrations of gold from the surrounding ore in which it lies embedded. And of course, like the small Brinksmat army, and London Vault required to protect one's Golden hoard, so too does it take a small army to extract fees for passage and guard against would-be usurpers. Piracy is not easy. And just as Gold has been subject to seizure and confiscation by governments and brigands alike, so too, the biggest risk to extracting tolls from such a property is insuring that appropriate tribute (and respect) is given to the State or Lord or the land.
Granted, Gold's main advantage is its divisibility. But, in Orlovian post-modernity,  there may be a social model that would allow some (and just like gold, but a choice few) similarly minded folk  - i.e. those with a hyper-active foresight, perhaps with a white-collar occupation that might be irrelevant in an Orlovian future, who want a share in a hedge against such societal breakdown, to pool their resources and potentially pursue a new occupation as a co-proprietor and partner in an enterprise that extracts tribute from prescient geographical investment.
Posted by "Cassandra" at 9:05 am

I've got one of them about 200 yards off front porch. Is this like horseshoes?

i think it's just an error of the use of language. you can melt down gold and it's fine. it doesn't lose value when it's melted down. that was mistranslated somewhere as 'doesn't lose value during a meltdown' and viola everyone repeats it.

As any good goldbug will point out, there's a flaw in your reasoning: if all savings are denominated in castles, the price of castles will likely rise above the cost of building new ones. And when that happens, we'll have inflation. Goldbugs note that the amount of gold mined is highly inelastic, which is why use it in the first place.

The castle form of investment lasted for several hundred years in Italy. In San Gimignano there are a few dozen tall towers, all purpose-built to pour boiling oil on potential invaders/neighbors.

The investment strategy stopped working in WW2, when the Germans hid in the castles, eg. Monte Cassino, and American bombers utterly flattened them. The town where my wife is from was on the top of the mountain, and was destroyed in the war. The town was rebuilt in the valley.

Maybe the risk of government "intervention" is the same risk for gold investment. And maybe there is a risk that people find X-Boxes, flat screen TV's, and other electronics more fun, and the lust for gold simply goes out of style.

Hole up in a fixed position? A few skilled riflemen could keep you pinned down indefinitely. Castles are good against short range inaccurate projectiles...like arrows.

Just retired and seeking an intergenerational store of value. Gold seems to have history on its side.

I've actually been looking into building a compound deep within the Bolivian jungas, as a bolt hole when TSHTF, as I think it'll be significantly better to be far, far away from anywhere with any geo-strategically important places. As such, if contemplating a fortified building to diversify your portfolio, I would highly recommend giving the castles a miss. After all, one cruise missile and you're FCUK'D! Post apocalypse, I'd much rather be in isolation in a desolate area that has all the necessary items to live. After all, tinned spam is disgusting; I'd much rather shoot some fresh meat!

re your Cruise missile concern.

Depends who fires it. It seems that being in the target rather than somewhere around it is the safest ploy

Medieval castles are militarily obsolete, and have been since the invention of modern artillery. That said, constructing your rural retreat with some, more modern, fortification technology makes some sense. Don't forget water purification, as well.

Castles can be put under seige & then it's only a matter of time before you run out of vassals to eat.
A better option might be a farm in an rural community, or a commune..

I think Osama has demonstrated an extensive network of tunnels and caves in the middle of nowhere are the new castle.

In the land of Autobahns castles are surprisingly cheap. I know a family that owns one and they made a contract with a golf course company to operate it for them (getting very little back in return). Another fairly sturdy design from the 12th century, renovated on 5 acres is available at the foreclosure auction for 1.5 million Euros minimum non-refuseable bid (http://www.burgeninventar.de/pics/thue/thue261.jpg ). Compared to Bay Area prices certainly a steal. But other castles have changed owners in Germany for 1 Euro each (the new owner had to promise to pay for upkeep). Even Mr. Cage paid only about 2 million Euros for Neidstein (fitting name), which included 400 to 500 acres, which means he got the castle for free or better. A steal! Alas, it did not make Mr. Cage any richer nor is it available for him in times of trouble.

Now compare this with gold. He could have seeded his hoard and with some luck after a few years he could have collected fresh Maple Leafs from the sprouted trees - probably with the likeness of King Charles on the reverse. Could you imagine a greater investment?

Zombies have no particular interest in gold or strategically situated castles. In the absence of basic social traits such as 'don't eat others', SHTFologists have long known that flesh will be the ultimate store of value. A dungeon filled with well-nourished, plump Investment Bankers and political leaders will go a long away in the new economics of 'hang-and-trade'.

You just don't make a lot of sense here. I think you are getting lost in your own over use of language. If you can't construct a logical argument with some modicum of parsimony, then maybe it doesn't make sense.

Castles are a thing of the past because they no longer serve a useful function. Don't confuse evolution with a mean reverting bubble. Oh I forgot, everything is a mean reverting bubble to you. Get on some armor, surround yourself with a bunch of like minded victorian bloggers and buy a castle. I'll purchase a few rpgs and other modern weapons and sing at your funeral. Oh but what's the point, taking a castle is a waste of my time, rendering it a store of zero value, unless you can find someone even stupider than you. QED

Ouch! I fear I might have defamed someone's Prophet (or was it profit??!!?)