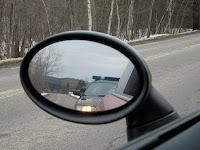 I was no angel/altar-person growing up. It was not an entirely mis-spent youth, but for a variety of reasons, not least suburban restlessness and boredom, I had my share of moments where we were up to no good of one variety or another, when someone, in a panic response to headlights, a flashlight baritone adult voices (whether real or imagined, whether the infraction minor or non-existent) would shout "HOLY SHIT !!! IT'S THE COPS! RUN!!!" Which was followed by the ditching evidence, an every girl/boy for themselves chaos/mayhem, sprints through forests, fields, swamps, brambles, into and out of gated yards with dogs, and across cricks and streams in order to arrive at a place of perceived safety. Whew, the adrenaline returns just thinking about it.

So I was reminded of such long-ago moments by yesterday and today's market reaction to the ummm errrrr "difficulties" in Dubai, admittedly the land of the "stupidest f*cking national business plan I've seen in my life"(after Iceland, North Korea and Iran). Tempting fate as the old-saw goes, leveraged specs and longs-squeezed-in increased exposures to virtually all category of risk asset AFTER two quarters of stellar returns for said risk assets, and AFTER price moves made forward returns appear rather pedestrian under the majority of likely outcomes DESPITE the unexploded ordnance strewn around including commercial real estate, the reality of possible CB exit strategies being implemented, the realization that The Era of Stupid Loans (except those to liquid markets specs on appropriate margins) is behind us, and will not be returning anytime soon, and that energy and debt service along with tax will, in the future, absorb yet high percentages of income presently channeled into consumptive pursuits. Running at the first sight of the cops is, while an amusing sight to see for those unencumbered, is admittedly a wise course of action under the circumstance, but liable to cause a pile up when simultaneously conjured and acted upon.

But one must wonder how intelligent such leveraged positioning is/was under the present circumstances and crowded-traded-ness. In this regard, I can only think of the head-shaking stupidity of the unending army of bungling amateur smugglers who used to [attempt] to run car-loads of contraband from Florida up to the northeast corridor, necessarily traversing the ignominious New Jersey Turnpike. Surfing the edge as they were with their illicit cargo, in a caricature of absurdity, they'd cross the Delaware Memorial Bridge into Jersey, in a clunker, of domestic origin with suspiciously foreign license plates (Fla, Ariz, GA,), heavily weighted-down in the rear, along with something else that inevitably would draw attention to themselves (a headlight mortally wounded or pointing skywards, tailight flickering), and driving too fast to boot. They would last - if lucky - to about exit #4, before the flashing red-lights of the bad-ass mirror-sunglassed (even at 0300hrs!) state troopers would pull them over, the officer then greeted by a pungently smoke-filled car (not your normal tobacco smoke) and a red-eyed over-confident driver. He apparently never got what was the best advice I ever received: "Don't break the law when you're breaking the law...."
Posted by "Cassandra" at 12:08 am

Americans have a very peculiar and distorted view of what The Law is. Mostly based on TV and HW Movies, they think it is about the good guys catching the bad guys.

One of the problems with the Law is that those in It are, like Economists, mostly unwilling to tell us what actually goes on. We really do need a comprehensive work by someone like Howard Zinn on what the Law really is and how it works. (Does the irony of War Criminal Obumma being a Constitutional Lawyer resonate?)

Here is one perspective on the Law

"Although we have been indoctrinated by our government-run schools to blindly believe that justice is found in the courtroom, the American Court is what I call "Holodeck Law" where nothing is as it appears. A television commercial coined the phrase, "image is everything," and as long as the public is unaware that American "justice" is a mere image, the government hand will always be quicker than the public eye."

you are a darn good writer! let's see you in the new yorker or something national. actually, would have loved to see YOU have written ars's "too big to fail"

Never keep your drugs and money in the same place.

The best advice on breaking the rules I ever got was, don't get caught.

I spent a lot of time in similar situations.

You only have to run faster than the guy next to you...

Crick? I think I know where you grew up.

This is a game of chicken between Abu Dhabi and Dubai. Dubai is attempting to squeeze concessions out of the lenders. The reality is there is a wall of cash in UAE that will refinance. I do agree that whole project is stupid, but that may come down to different cultural visions of "Taste"

Late to the party, but the saying best sounds like this : commit one crime at a time !