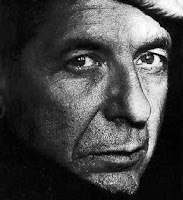 Dark music for dark times. Novelist, poet, Canadian songwriter-singer Leonard Cohen's first album was so dark it was only truly appreciated by 119 people, 112 of which were Canadian. OK, that's not true, but brilliantly brooding and contemplative as it was, he and his art remain enigmatic and less appreciated than deserved. But dark is how I feel, as I, along with all that is good in financial markets, are dragged out to sea by an official undertow, the grips of which won't let us back to shore. Must we wait for systemic destruction before we (as nations and people) make even the most modest attempt to alter that which is unsustainable? Fear not, however, for Cassandra: the pills are safe in the medicine chest, and the knives remain sheathed. But Cohen had a way of distilling an archetypical melancholy, that somehow seems especially appropriate here and now.

I like this blog is fantastic, is really good written. Congratulation. Do you want to see something more? Read it...: Great investment opportunity in Costa Rica: real estate for sale by owner, rci jaco lodging, rci jaco lodging. Visit us for more info at: http://www.jaco-bay.com/

Well, as you can see the comment spammers are determined to lift you out of your gloom.

So a propos, and a delight to see (from someone who named his consulting company from a lyric to the LC's Democracy).

Cohen's oeuvre as a whole is appropriate to the times, but not only for the gloom. His work reminds us that even in despair we are alive with our passions, in love or hate but always kicking. Beautiful losers. In Cohen's voice, agony is always attached to eloquence, humor, and awe, and despite the melancholy, we mostly get by in what is less like "mudding through" and more like the agony of reentry, we streak brightly through the darkness as we burn. These are bad times, but in the end it's just another Dress Rehearsal Rag.

Thanks for posting this..

Great post Cassandra. I haven't heard that album in ages. I had it on cassette tape in my car but it wore out long ago.
Must find a digital copy.
Long time a ago the summer before the lures of Wall street made me quit my EE PhD i was an intern at Bell Labs in Murray Hill.
We were working on a new protocol for the Internet (which obviously became obsolete) called asynchronous transfer mode.
When we built the prototype my suggestion (which was accepted) for the first words to be sent down the voice channel were the lyrics
"first we take Manhattan then we take Berlin"

Now looking back this was just after the S and L crisis so another bit of irony.

Hmm,
There's something in the egregore nowadays... Gloom, anger, dread. Makes you wonder what's going to come up. As if there was a corpse that's been safely anchored in the deep but now the chain has broken and any day, truth is going to surface.

Leonard Cohen is a true genius.

As is another Canadian legend - Neil Young - a rich source of inspired desolation as well.

Congratulations on your excellent taste, and a very stylish blog.

if you want to take a look at mine:

Steve,
Thanks for the kind words - and plug - which found its way to deLong's! Democracy came to mind as well, as did some passages from Beautiful Losers, (which I believe was recently translated into Chinese), but I thought less is often more, and so limited it to a single most reflective song.

MancTrader- It was Berlin first, then NY given that IKB and Landesbanks got the Emperor Has No Clothes" thing going in earnest. I was shipwrecked once for a year in the narcotic burbs near Bell Labs (Summit/New Prov), a place so uptight they ticket you if you dare park facing the wrong way to traffic on the broad leafy avenues. Makes Switzerland look laid-back...

Kristiina - I adore your analogy. To extend it, however, we are at the point where - intypical hollywood suspense-building fashion, the scene's are cutting between voyeuristically watching the culprit who is nervously and comically acting guilty in terms of actions, lies, body language, and the corpse tethered by disintegrating chain to the anchor, now breaking loose - all which will heighten his culpability and catch him out when the decomposed corpse surfaces. I'm sure no one has failed to notice just how nervous and fidgety Mr Bernanke IS when he speaks, before both press and congress. His voice cracks, and it has all the tell-tales that he doesn't actually believe in - or at least is not very confident of - the policies he's pursuing. Compare that with Mr Trichet, who always appears to be the French headmaster lecturing an insolent or naughty student caught mis-behaving, which not ironically is precisely the role of a central bank in regards to the financial markets, who will push and push until.... Call me old fashioned, but I see nothing wrong with corporal punishment when applied judiciously.

OAP here (Old Age Pensioner?) not sitting around waiting for secret signal to gum Bernanke to mush. Bet against Wall Street, that's the ticket. I'm having a great week, not last seen in some time. How are they going to debase Swiss Francs? Or Gold?

Throw off those chains,
dance off those aches and pains, dump your stocks you held in vain, and buy commodities to make some gains. . .

Sorry for chipping in late, Cass..

Cohen is one of the few songwriters that managed to incorporate literary skills in a music (cultural John the Baptist if there ever were one) that was becoming ever more visceral and simple. Among the few, Randy Newman also stands out, at least for me.

His,and maybe anybody's, most sly and perfect metaphor - 'Knelt there at the delta, the alpha, the omega'. Maybe you'd get triplpe duty out of that one.

Would it be caddish of me to note that I prefer Don Henley's cover of "Everybody Knows" to the original? Probably.

(And it's not for disdain for Cohen's voice; I prefer his "Famous Blue Raincoat" to the Jennifer Warnes and would call the Jeff Buckley version of "Hallelujah" a push with the original recording, though Buckley is better than some of the overorchestrated YouTube versions.)

Cassandra,
The current symptoms of stress certainly went from Berlin to Manhattan but the idea virus first infected Manhattan and then spread to Berlin.

Interesting that you lived near Summit, i would never have guessed, that puts you in such great company as Jim Cramer.

I personally couldn't stand the place and reverse commuted from the city over the GWB. Luckily i was paying someone with a carpool and just slept thru all the traffic there and back.

I despised it too, and escaped far far away, never ever to return for more than an hour or two to change planes at the airport. I used to work in the World Trade Center in mid eighties. And just as folks remember where they were when Kennedy was shot, my reference point is black friday. I can recall driving home on October 19th 1987 (I would often drive to Jersey City park for $4/day !!) across the beautiful black industrial bleakness of the Koscziusko Skyway, and through the surrealness of the industrial outskirt of Newark, listening to Jim Grant give his two cents to NPR or such, using words such as "awe" ,"wonderment", and maybe even "magic" when pondering how and why markets might convulse so. I knew it was historic, in mid-aftgernoon, and printed a "quotron " page from that day, though sadly both quotron and page (as well as the days of 3-pt moves in the long bond!!!) now long-since disappreared.

Summit is illustrious, also being the home also of Jack&Tom's Beacon Hill Investments, who as it turned out employed a most interesting friday-afternoon method of valuation called "Mark-to-Investor-Expectation". This sort-of-worked for a while, as they printed 1% per month++ for a year, making investors happy, but I recall sitting down with one of their competitors - the guys at MKP - (who themselves got the rug pulled out from under them by Sandy Weil in 98, fessing up to mortal losses, but 'fessing up and recovering to start anew), who just couldn't fathom how "the other guys" - Jack&Tom - were persistently making money as spreads were widening. They reckoned it was well-nigh impossible, without outright punting which J&T swore they never did. Well in true Summit fashion., they weren't punting nor making it, just lying and cheating hoping, no praying that rates would back up large, sending their treasury hedge back towards their mortgage portfolio which had lost all convexity and hit a brick wall due to the massive dive in rates. Sadly there wasn't a god, or he was un sympathetic to their plight.... Cohen's "Everybody Knows" was quite appropriate there too...

I'm not sure you even realize how sadly perfect Leonard Cohen is as a metaphor for the current state of the financial markets: after spending 5 years at a Zen Monastery he emerged to find that his manager had stolen all but a couple of hundred of thousand of dollars of his money leaving him in terrible financial shape.

You can hear him talk about this among other things in a wonderful interview Terry Gross did a few years ago: http://www.npr.org/templates/story/story.php?storyId=5422403