Please Tattoo This Upon Your Brain

Lawlessness is more than a nuisance for law-abiding citizens. And ever since the inflationary sheriff (the bond market) was run out of town by hegemonic non-US Central Banks market intervention, poor fiscal policy, and not-so-benign neglect by the US Fed, have left bond shorts hign-and-dry. In the process, the good citizens of Saversville have yielded the streets, first to the free-money shadow-banking system snake-oil salesmen whose wares pushed up asset prices everywhere and in everything, and then (with the exception of the Art Market), has now yielded them to the gang of commodity renegades. Vigilantes have started the 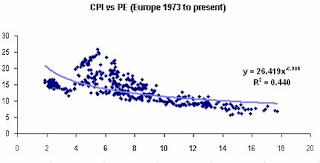 Should the good citizens of Savesrville care? And, if so, Why? There is no need to demonstrate once the again the inflation in real house prices and the well-known near departure of median home prices from median incomes (half the core assets), and the deflationary effects that might will likely result. And while it is true that the convergence (between house prices and incomes) can happen via rising incomes, the competitive pressures upon OECD median household incomes resulting from globalisation makes this appear less-than-likely at the moment.

Equity comprises the other major portion of "core assets". The three graphs (ultimate source I am told is UBS's Andy Lees - a thoughtful London-based analyzer of macro trades and megatrends) gives a vivid picture of what one might expect to equity 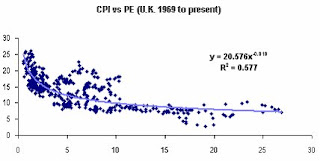 ratings in the event inflationary fears are requited, and/or ticks up further. This picture should be a cornerstone image in every equity investor's mental archive, but with horizons ever-short, and more attention upon "the nominal" vs. "the real", equity investors appear to be behind the curve (at least as represented by ratings as implied by the regressions below) , if of course we are to believe the bias in traded physical commodity prices as well as un-hedonized un-Boskinzed CPI baskets .
Posted by "Cassandra" at 8:27 am

Looking at those charts just reinforces to me that I want to be short, so to say, any business/person who has sat back in a comfy chair for twenty plus years and collected spoils and awards for performance that in reality has almost nothing to do with what they brought to the table.
It also, as I have mentioned here before, makes me want an extra, extra cushion of safety with any asset recently/currently beaten with the ugly stick.
I’ve seen/see ventures launched almost continuously in which the participant’s eyes are firmly fixed on the rearview mirror, and wonder, just how much more mediocre or negative real performance will it take for them to just give up.
RJ

Andy Lees is excellent, one of my few "must reads" each day. I suspect there is a final, ultimate source of these charts, however; the picture quality of the charts in his original missive (which I received) is suggestive of a copy and past job.

When the Mullahs seized power in Iran, it goes without saying that there was a big purge. There were, however, a few - call them well-placed technocrats - who kept their positions for they had been "pious" to the mullahs,l and were not seen as pigs at the trough, both economically and ideologically - despite their distance from the clergy. In the feeding frenzy and resultant jostling produced by the great leveraging, many in the USA have undoubtedly forgotten that it won't always be thus. I admire Japanese (and European) management's moderation in this respect, and think it will come back to haunt America with a vengeance.

MM - He is indeed good, though apparently UBS is keen on distancing itself from his outspoken views, particularly where they diverge from the "house view" if such a thing is even possible in a Large Three-Ring Circus.

I have a simple sell side signal: when the "real earnings yield falls below 1% it's time to bail out.

C - while I think US consumers' real living standards and to a lesser extent those of other OECD countries will be under constant pressure in the next decade, I'm not so sure about corporates. American companies are now much better capitalized and less leveraged than their European counterparts. A harsh yet important lesson learned from the halcyon days of capital structure excesses in the late 90's. And many Japanese companies appear prime candidates for the value trap; an extremely weak TW Yen, falling nominal wages, and shareholder subordination haven't exactly spurred enviable profit growth. They don't say "Japan can produce anything but a profit" for no reason.

Anonymous 0624pm - I like the real rule. But what price measure are you using to deflate the nominal by?

Anonymous0324am - As you point out, globalization is impacting things in ways that weren't relevant to prior paradigms. As for corporates they cannot flourish untethered, for the demand for their wares is ultimately tied to Real PCE (So says Joe Ellis, who I think smart). There IS a tug-o-war between the raw numerical increase from globalizations newly minted consumers, and the squeeze of diminishing real PCE experienced in developed markets. Assuming it's "a wash" (for a while) - with the growth of one offssetting the drag on the other - the decoupling (I do not think) will not make obsolete the historical relationship between valuations and inflation since the major mechanism is not inflation squeezing nominal earnings (though it squeezes real ones), but through the impact of higher interest rates as an alternative to equity. Weirdly, with Central Banks so sanguine, it remains possible that more of the same (i.e. nominally rising prices, ahead of nominal wage cost rises, coupled with lax monetary policy (steep yield curves), for a while longer makes equity preferable to things fixed-interest, since central bank action is keeping the whole curve from shifting up to where it SHOULD be by any Taylor rule. But equity markets are (or should be) discounting mechanisms, and they will ask how long this can go on before....

As for TeamJapan's lower returns, I think for a "Greed is Good" perspective, one would indeed stay clear. But from a systemic point of view, thhere are important things for Cowboy Capitalism to learned if it is to evolve into something more resembling Open society Social Democracies of Western Europe, than Sao Paulo's post-modern cariacature of a Ridley Scott flick.

The Real Earnings Rule
Historical Earnings Yield - Local CPI Measure (UK RPI)
I'm not a pro so I like to keep things simple.

"They don't say "Japan can produce anything but a profit" for no reason."
Part of the reduction in Net Profit seen at many J. companies in this year's reporting season is attributable to losses in securities investments. J. companies would be more profitable on a net basis if they stopped making securities investments on behalf of their stockholders. That said, returns on investment/capital employed as calculated on an operating profit basis are lower than overseas peers. I've often wondered about this and put it down to the tax system which seems to incentivize capital spending.

Really interesting charts. Its useful to think about causality. Why is inflation so insidious for P/E's?

Inflation clouds the future, mostly by making it difficult to strip out real returns in forecasts, but also because of the danger of an infaltionary spiral which results, ultimately, in a deep, hard-money recession.

Firms and investors react to uncertainty by demanding higher rates of returns. That leads to lower P/E's.

So where do we stand now? I'd say we have rock-hard certainty about the future. No, really. The complacency about future inflation, and about the Fed's ability to control it, is stunning. This in a decade where real Fed Funds have been consistently been negative or, at least, accommodative.

Why the certainty? I think its because our #1 inflation signal is flashing green. Bond yields, and their low volatility, are the source of complacency. This is nothing short of the Hoax of the Century -- millions of economic decisions made on the basis of a false economic signal.

To call a "pop" you need a "pin". I can see the pin headed towards the T-Bond one in the form of unstoppable Chinese (and other pegger) inflation. When will it make contact? I'm not sure, but I do know bond vols do not reflect that exceedingly fat tail.

David,
I was going to go precisely there in my post, and thank you for taking it one step further in causality.

At present this is also why the TIPS still look attractive since the bond market refuses to discount these scenarios in the future. Note: I am wise enough to take great care in declaring a market as broad and deep as the US Bond market "wrong". That said, I am emboldened in such a statement by the large participation of foreign authorities. Most, have no business being there, and it THAT, coupled with the soporific effects of their presence upon domestic policy investors I am confident has a distorting effect beyond the particpation rate of such foreign officals particpants. Brad...?!!??

Andy Lees, the source of these nice regressions thinks the "the pin" is the changing agricultural terms of trade.

Or am I reading it wrong?

I wouldn't readi it that way, for the PE scale should be probably be logged to make it more meaningful. Secondly, the variability is seemingly increased only in the USA and if you notice there are two distinct regimes - above fit and below. I would wager that one regime is a function that in extremely low inflation or deflation, earnings can go negative (i.e. there is a 1/x problem. In the other regime where inflation is low, investors mistakenly extrapolate it forward and pay insane prices for stocks. Eiroeapsn don;t be so prone to such optimism, hence the fit is more efficient and predictable at low CPI (resulting from recession), and the UK, the same, and where given history, one would be foolish to bet on the permanence of a low inflation regime.

Perhaps as interesting are the dozen or >20+% prints in UK. Such events will decimate unhedged cash fairly quickly, particuarly if in succession.

Do you where one can get the underlying data in a spreadsheet to play with?