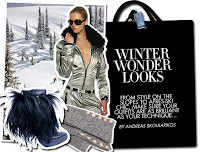 If there is any doubt that the high-end of conspicuous consumption is stinging, just come and visit Aspen or Snowmass. Local Pitkin county radio this morning was discussing the closure of several well-known high-end retail stores - not for the season, but permanently. The reason cited: many of their clients, they said, had were reeling from being "Bernied". The slopes are eerily quiet. Kids who'd we' had booked into group lessons were nearly private. Chatting with a local high-end builder, he was quick to tell me that he has no backlog with current work ending in July. Yes he said he's been through three of these before and something has always come up. But this time, the something has yet to materialize.

Most ridiculous is the real estate porn infusing local glossy mags, still sporting prices beyond the realm of the absurd. Despite the confidence of local cognoscenti made wealthy from peddling slopeside or barren building lots with a view, this shoe has yet to drop, sure as Danny Bonaduce had freckles and a numbingly expensive cocaine habit, it will drop with a resounding THUD! If one needs any evidence on top of the increasing number of building sites abandoned by homeowners made skittish or insolvent, they need only look to the headline news today of the abandonment of Little Nell's Snowmass project due to inability to sell forward OR find adequate financing. Not surprising perhaps at a mind-numbing $3,000 per square foot. This leaves a rotting carcass in the center of Snowmass - an eyesore to other local residents who've recently overpaid, or worse, put a deposit on a project that will likely fall into receivership.

Like many a bull-market project and their champions, Little Nell and their partners undoubtedly committed the cardinal investment sin of extrapolating forward, that which should never have been - at least not if one is dependent (or will be dependent) upon munificent external finance at some time before completion, or the stupidity of strangers. Such fallibility is nevertheless human, and before this cycle is over, they will not be alone in having assumed they could borrow required sums to complete, and subsequently shift astronomically over-priced leisure housing to the yet-to-be-identified even more stupid would-be purchaser. But requiring more scrutiny perhaps is the description of the project itself ("luxury", "five-star", "exclusive", "gourmet", "world-class"), for such adjectives appear increasingly suspect, with their redemption more elusive than anytime in living memory.
Posted by "Cassandra" at 2:13 pm

Here's another "upscale" ski area development gone bust (although not as glam as Aspen/Snowmass):

A classic example of ponzi financing as depicted by Hyman Minsky, who was right about more things than not, especially the cycle you've described here whereby investors increasingly depend on rising asset prices to justify bigger and more risky projects. "Ponzi units are speculative units with the special characteristic that for some if not all near term periods cash payment commitments to pay interest are not covered by the income portion of the expected excess of receipts over current labor and material costs."

S**t, rather than simply applying this definition to the "rotting carcass" of Snowmass, you could make the more general argument that the U.S. is one big Ponzi unit! I wonder when the equity is going to get pulled out of that one.

Actually, Cassandra, although your writing style is a little more elegant than his, I find your ideas align with Minsky's more often than not. I wonder why he doesn't get more references in your posts?

Chris, thanks for the kind words.

I became familiar with Minsky's work later in my life (at the turn of the millenium). He articulated (in the true sense of the word) lucidly with thoroughness, suspicions I'd long harbored . His theories and discourse (like Schumpeter's) rang true to me as if finally discovering a framework to help substantiate my own anecdotal observations and feelings about cycles,speculation, intervention and the financial economy.

While there are elements of "Ponzi-ness" to the USA, I am despite being a skeptic by nature, not as bleak in outlook. Yes debt-to-gdp is high, but so are fixed assets - of all kinds. I haven't seen a really good and thorough national balance sheet so I reserve judgement, but my gut says there is value there. To me, the issue is more one of distribution than Ponzi. USA NAV remains substantial, it's just mal-distributed - increasingly since 2000 with assets and cash-flows privatized and liabilities socialized.

As evidence of this, it should be noted in my highly skewed anecdotal musings on Aspen that the Airport was brimming-over with shiny private jet aircraft, more than I've ever seen anywhere in the world - Nice, Teterboro included, maybe over a hundred in all. This says a couple things: much real estate there is no consequence to their owners be they Global Brewing scions, oil magnates or Russian oligarchic potentates. That said, far more is in the [unstable] title of the newly more modestly rich who were formerly VERY rich (on paper) who've seen 80 to 90% of net worth smoked by the financial sectors diminuation and bankruptcy. With a $50million net worth, one can confidently burn NetJet hours without care. At $5million (and falling), and unemployed, one is no longer flying first or even business. The aspirational class - the temporarily rich - drove/enabled much of this (Little-Nell like luxury bubble), confusing a modest lead in the middle innings with some kind of final victory, while the super-rich continue to collect trophies like my younger daughter accumulates stuffed animals.

I've read some interesting anecdotal stuff about how
many of these luxury resort developments came to be, in particular several financed by Credit Suisse. One
recurring theme seems to have been that the bankers went looking for the developers to do a project, rather
than the other way around. They were looking for the
fees, since they planned to sell on the loans. Very much like the residential mortgage brokers who peddled refis and actively solicited, door to door, such business.

So you got to enjoy some of that powder that came down last Friday, eh Cass? Wasn't much fun to deal with down here in the city.
Same shoe waiting to drop at Tamarack, which is outside Bosie. I took a trip up there this past summer to see if there was anything to be had and was just astounded where the ask remained, especially b/c the owner was already BK. And I believe the main lender at Tamarack was CS, Woland.
RJ

I serendipitously enjoy reading all your posts.You sure have a flair for writing,Cassandra.Please try to post at shorter intervals.Kind Regards.

Howls of derisive laughter at the wannebe rich.

Got back from Brian Head where not only did I ski every day- but for $22 a day full lift all three mountains.

Sunblock 50 was not quite enough though. Ski in lifts- no waiting on all the runs but the bunny lift- half empty condo complexes- scored a private party condo for 33% off the regular price. One instructor for three rugrats.

It was quality- then I went back to work.

The world is waiting for the American luxury consumer market to spark up and create another boom period for the emerging markets and all that feeds from that process.
Your post indicates that the recovery is still waiting to happen.

Just the lesser American life moving in. We have to get used to it. Less pay, less of everything. Remember, there are a lot of Chinese mouths to feed, (which the academics tell us) are our responsibility.

Yves Smiths' Naked Capitalism is a great site. However, I have noticed in the last two weeks a change in the quality of the comments. They almost seem like they are canned, from FOX news.

Oh well, I'm sure that YVES SMITH's Naked Capitalism knows that her whole message is at risk.