After years of denying culpability, in a tear-jerking press conference today, former US Federal Reserve Board Chairman Alan Greenspan finally admitted to using monetary steroids, during his long tenure at the helm of America's Central Bank. "I'm so very sorry, and I just hope the people can find it in their heart to forgive me". He went to say: "I knew it was wrong and I disappointed, myself, and the American people and everyone else" (except Wall Street).

America's economy finished first amongst OECD peers during the heady days of Barcelona and Sydney, and many observers suspected that the Fed was not playing fair. Supporters of Mr Greenspan however were prepared to overlook his indiscretions. "Kip" Fat-Bastard senior 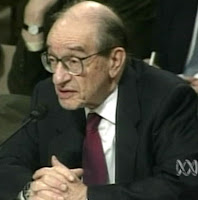 economist at Goldman Sachs said: "Everyone was using them, so even though he was technically guilty, it was a fair fight." "And look at the inflating tits on those Russian and Chinese athletes! There is plenty of guilt to go around."

The investigation continues with a few hold-out continuing to assert their innocence, including "Honest" Hank Paulson, "Spineless" Ben Bernanke. As recently as yesterday, he again asserted that "Neither I, our central bank, nor my country has ever resorted to illicit steroid use to boost performance. "It's the savings glut...honestly! I swear! It has nothing to do steroids..."
Posted by "Cassandra" at 5:20 am