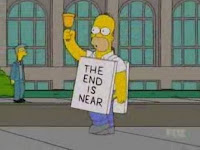 There seems to have been no shortage of bears in the world over the past several years. A re-read of investment letter writers,  strategy pieces from buy side firms, or most notoriously, ZeroHedge, can attest to this. And despite the dour headlines, of sovereign debt crises, one macroeconomic disaster after another, or the dire state of political confidence and leadership across the western world, few of the curmudgeonly uber-pessimists have made money in what should have been proverbial salad-days for the Kaczynski-ites. So despite the near torpedoing of the PIIGS, their sovereigns and their equity markets,the best returns have more reliably been on the long side, while the one's who have been most vocal in trumpeting the impending apocalypse have little to show for it in terms of banked investment returns for their investors.

Ignoring whether from the unrequited pessimist's perspective this should, or shouldn't be, or why it is or hasn't been something else, one can not entirely reject the potential mitigating excuse that "it ain't over 'til 'it's over".  Keynes of course would have countered that "the market can remain irrational longer than you can remain solvent". The nihilist would add that in the long-run, we are all dead. And all could agree , at the very least,  on this much.  That "they" - the uber-bears, the financial eschatologists, the doomsdayers, the macro-dispensationists - haven't in the main made money needs some explaining that consists of something more convincing and durable than government conspiracies, plunge protection teams, cabals of jewish elders of zion. Their failure to capitalize says something important that is worthy of examination by anyone who invests or trades.

Of course it could just be bad luck, or simple ineptitude. But I fear something bigger is at work. There is an adoption of a fundamental belief that is not far removed from doomsterish cults that believe "The End of the World Is Nigh". For en-masse, this group is making the same mistake - they   believe that a trade is more than a trade. What does it take to believe that a trade is more than a trade? Conviction? Yes. Phobias and self-doubt? Indeed. Psychological projection of something-or-other? Likely.  Ideology? That helps. Righteousness - both absolutely and relatively? Black & white thinking? Yes, and yes. Even I am not sure where I am going with this but it seems to lead to a rather provocative thought.

Perhaps, just as some have suggested that there might be a "God Gene" which proposes that a specific gene (VMAT2) predisposes humans towards spiritual or mystic experiences, so too might there be a Doomsday Gene, a yet-to-be-identified gene that predisposes humans towards a belief in "The End of The World As We Know It". This would account for unitary market views, the failure to cover or reverse positions in investments when events are quite obviously changing and/or pessimism towards underlying causes is shifting right before everyone's eyes. They would be prone to see only the negative, interpreting every glass of water as half-empty, and dismissive or oblivious of things that run counter to a highly-anchored and well-insulated belief system - one that they undoubtedly feel they've arrived at through independent thought but which they, one might posit, likely acquired as a result of their genetic predisposition. It would explain a lot with a little.

The existence of this genetic predisposition likely extends to the beginning of time. Within hunter-gatherer societies, it might have provided a counter-balancing cautionary fear that was useful in preventing overly-bold expeditions such as assaults upon woolly-mammoths armed but with a table spoon. During agrarian times, it might have helped insure villagers kept sufficient grain reserves to protect against periodic  drought and resulting famine. As a result, like homosexuality, it's usefulness within the gene-pool has carried it through time to survive modernity.

Every religion has deep eschatological roots, both within their mainstream, and their offshoots.  From the Jews and the Book of Daniel, to Jesus himself, to the second coming, along with all manner of historic and modern dispensationalism, from the Zoarastrian Frashokereti to the hindu Pralaya, the Norse Ragnarök to the Buddhist, Yam, Nostradamus, even Isaac Newton (who was afflcited) have developed and subscribed to apocalyptic doomsday end-of-world belief systems that bear striking resemblances to the financial versions that repeatedly cause shorts to overstay their welcomes and not recognize when things are getting ... errr .... ummm let's just say "less bad".  Like the burning embers of a fire, it smolders, fanned perhaps by the same predisposition that drives Stendhal's Syndrome, Jerusalem Syndrome and, for the Japanese, Paris Syndrome.

What IS different today, from days of old, is that (apart from the world NOT having ended) there now is a system of instantaneous mass distribution. Those potentially sufferering, and those who may be so genetically predisposed can now meet up at any hour of the day or night, excite each others' fears and worries, with all manner of topical charts, and half-truths, and together, figure out ways to undermine the action that might lead to political and/or economic improvement as well as sabotaging their belief that something, anything, might be improving and require a painful change in dearly held belief structures.

Before we completely dismiss those afflicted however, we must appreciate their virtues and accept that they can be perceptive and bring lateral or alternative perspectives to the foreview. And they often have good senses of wit (though don't expect them to buy the beers since they usually are in need of money for obvious reasons). It is likely that we all have friends that fall into this category. And this is fine and is as it should be. Just be careful when they are offering financial or trading advice, and whatever you do, under no circumstances, give them your money to invest. There are much cheaper and more constructive ways to be otherwise occupied or entertained.

You'll be interested in this - The God Gene Scientist and FunVax Scientist discuss the possibility of a vaccine against religious fundamentalism.

The bear case always seems to be more intellectually stimulating, so people who want to sound smart can spout off about reasons to be cautious that aren't on CNBC or the equivalent.

Among professionals, there is a psychological need to be right when everyone else is wrong. At firms where I worked, most of the traders who blew up were trading from the short side, and the very few instances of tickets in the drawer were short sales also. Maybe it's my age that stratifies the sample, as I got into the business in 1971.

But for now, the fact that stocks have been unrewarding in the aggregate for over a decade doesn't hurt the pervasiveness of pessimism.

The Bears are right. The system should have collapsed years ago, but is being propped up by an old boy syndicate, a corrupt Fed, a negligent government and moochers.

you have demonstrated my point quite precisely!

Cassandra, I am an afficionado of Stephen King, doomsday novels (including the zombie sub-genre) and movies (can't wait for World War Z), as well as endearing newsletters spewed out by the the likes of Robert Prechter. I simply like a good scare. Taken in appropriate quantities, it is like chicken soup for the jumpy soul. But it has nothing to do with investing, trading or outlook on life.

One somewhat more serious pt I'd like to make is that it is difficult to judge when there is safety in numbers (or in a herd), and when it is a good time to be a contrarian.

Trading? WTF is that? Do you people do any thing *constructive*? Can you change the oil in your car? Do you even understand the Otto cycle? Can you drive a simple nail? SCREW in a F'ing light bulb? WTF??

But I think you have more Ayn Rand capitalist( there... I said it!) bitch inside you than you KNOW.

" Keynes of course would have countered that "the market can remain irrational longer than you can remain solvent". "

In my view...from my view..YOU people have done more to F'up this world than any.

From where I sit...YOU are one of them and for some strange reason.....I like you.

Perhaps there is another way to square this circle: Markets today move up or down in proportion to socialization of risk. Were governments able to credibly back stop investment losses beyond, say, 20% of current values, Markets surely would surge. Just as surely this would be a disaster for its' citizens. So the very suffering you might see around you is a reason to buy risk, not sell it. Those socialist policies you abhor support asset prices more than they support deadbeats. Perhaps these Cassandras, a decidely Galtian group, can't come to believe that Markets, now more than ever, love Big Brother.

Surely your point can't be that their pessimism was unthinking, uninformed or useless.

But what is your point?

Dear Cassandra, I would say that the lack of sustainability of the status quo is too obvious for many; the imagination of its end in disaster easily imaginable.

But the constructive solution is not obvious. The entrepreneurial idea comes from out of nowhere, otherwise somebody else would have already capitalized on the opportunity. Malthus is logical, his defeat by ingenuity is not obvious, it is the unplanned event that changes the world and enriches the courageous.

I'm a very sceptical bull. Forever, because that is how humanity progresses through calamity.

For Christ sake, it's a cyclical bull in the midst of the secular bear. Yeah, it has overstayed its welcome.

Total debt levels, which were way outside any previous historical bounds at the start of this Depression, have, if anything, been increased. The Wizards of Oz have briefly succeeded. But the numbers say that cannot last. And you, of all people, know it. What is the name of that river in Egypt?