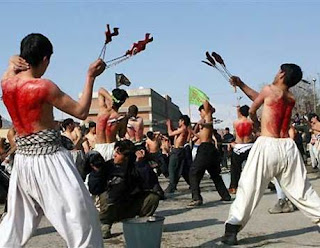 I just finished reading the Sept monthly letters from TPG, Greenlight, Cerberus and Tontine on Deal Breaker (thanks to Greg Newton at Naked Shorts). Pease forgive my feelings of deja-vu, for not only have I seen it before, but I've even scripted it for them.

Inside, there is lots of blame shoveled around - mostly upon desperation or foolishness of others, the market environment, the seeming unprecedentedness of it all, along with small dose of mea culpa for not doing better. Then, there is the wrapping of their culpability under a cloak of relative performance - since inception, vs. Chinese stock indices, vs. peers, even vs. the returns of the Calumet Auxiliary Women's On-Line Investment club - as if repeating a mantra (any mantra) justifying one's longer-term self-worth will wash away the sins of losing 60% of investor equity in heartbeat on a portfolio of very concentrated, super-high beta, massively correlated bets, or with hindsight, to forlornly validate the decision to go "all-in" (yet again) on black following sixteen quarters of "blacks". Aw shucks, it was "red", sorry...

There is little mention of the wisdom of the Hedge Fund Model of using serendipitous momentum-correlated equity to borrow stochastically-available credit, shoulder the burdens of complete counterparty-risk to access the leverage, in order to pile into crowded trades for which there is little exit until after the embers have finished smouldering. Nor is there much mention of why they were willing to bet everything that this wasn't the big one when the tide had rather obviously begun washing out a year a go, the chain of events unfolding had been in one direction only, and the weather wane of liquidity, growth, and sustainability was pointing south. There wasn't even a grown-up sober attempt call a spade "a spade" to say something like you just don't get 100% returns on the upside without risking near-total annihilation on the fat negative tail. This of course was not addressed.

But now we are a week into October. And another 10+ percent down. And another set of crowded trades is being liquididated. No, this cannot be good. This is unlikely to repair damage done in September. Or validate one's assessment of unimaginable values. Indeed, these moves look terminal to those that wore them.

I am naturally suspicious of mis-guided or disingenuous self-flagellation such as that depicted in the inset photo above. This spate of letters strikes me as a form of "portfolio management ashoura", a rehearsed and stylized self-flagellation that misses the point and many of the lessons wrought by the event itself.
Posted by "Cassandra" at 11:34 am

I love this blog...its so entertaining. I come here whenever I need to put a smile on my face.Keep it coming Cassandra...you are one insightful person and a very gifted wordsmith.

I too will pile on with praise. To embrace my snobbishness, a blog that knows what Ashoura is, IMO, much more likely to understand our situation than a relentless finance nerd talking about minutae. Good work, please sir (madam?) give me another!

I visit for the excellent writing.

It's hard to find anything to smile about these days but you have succeeded with grace and skill.

Just wanted to congratulate you on your blog. Your writing style is excellent, though non-natives like me cannot understand everything you say (take it as a compliment, you use thrice as many different words as ordinary bloggers).